Stock is down, but Samsung’s spirits are not

Stock is down, but Samsung’s spirits are not 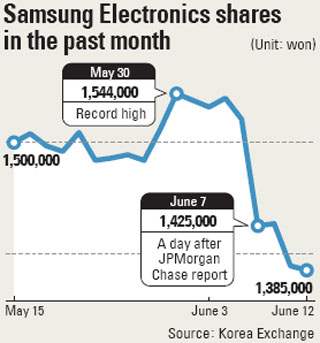 Samsung Electronics continued its downward spiral for a fifth trading day yesterday, edging down 0.3 percent to close at 1,385,000 won ($1,221.8). The combined 10 percent tumble in the No. 1 smartphone producer’s share price over that period has evaporated almost 24 trillion won in market capitalization.

The abrupt fall of Samsung Electronics shares gained momentum a day after JPMorgan Chase on June 6, when the stock market was closed for Memorial Day, said in a report it lowered Samsung Electronics’ target price from 2,010,000 won to 1,900,000 won, citing slower sales of its latest flagship Galaxy S4 smartphone. It said it now expects shipments of the S4 to be 60 million this year, after a previous estimate of 80 million.

On June 7, the stock nose-dived 6.2 percent, led by a selling spree by foreign investors. Foreigners’ stake in Samsung Electronics, which hovered above 50 percent earlier this year, fell to 48.7 percent yesterday.

Samsung, perplexed at the stock’s unexpected downward move, yesterday scrambled to prevent further decline and console investors. J.K. Shin, president and CEO of IT & Mobile Communications, told reporters in the lobby of company headquarters in Seocho-dong, southern Seoul, that the Galaxy S4 was “still doing well as has been planned.”

“It’s just that the market had too high of an expectation,” he said. “[JPMorgan Chase] said earlier they had high expectations and then switched their stance later. We never said [we were in a bad shape].”

Having been unleashed on April 26, the S4 has sold over 10 million units worldwide, but sales in Korea remain sluggish. Samsung Electronics relies heavily on its IT & Mobile Communications division that embraces smartphones, which account for nearly 70 percent of operating profit.

Since Samsung Electronics has a significant impact on the stock market here with its nearly 20 percent share in the Kospi, the Korea Exchange and the Financial Supervisory Service, the top financial watchdog, said yesterday they have scrutinized monitoring of foreign investors’ Samsung share transactions, with a focus on sales patterns.

Korean authorities suspect speculative investment activities, given the massive short-selling volume of Samsung shares. Global investors have recently been adjusting their portfolios- shrinking the portion in the emerging markets, including Korea - as the Federal Reserve in the United States moves toward tapering off its quantitative easing.

“I am surprised to see such a tough and abrupt losing streak for Samsung shares,” said An Sung-ho, an analyst with Hanwha Investment & Securities. “The S4’s worse-than-expected sales appear to be a superficial cause of the stock’s strange move. I have no choice but to suspect there is something else that has affected it, although it is very hard at this moment to pinpoint a single factor.”

Amid rising questions over whether shares of Samsung, the Kospi’s top player in market cap, have passed their peak or are simply in a temporary correction period, local analysts choose the latter.

“Concerns over slowing demand for high-end smartphones are nothing new and were previously reflected in the share price,” said Lee Seung-woo, an analyst IBK Investment & Securities. “Also, it’s true that the initial expectations for the S4 were rather high, but only more than a month has passed. The bad-sales argument lacks objectivity.”

He maintained the target price at 1,870,000 won, adding, “Despite short-term noise surrounding it, Samsung Electronics is seen to eventually recover to a level beyond the previous one.”

Lee Se-chul, an analyst with Meritz Securities, also said the Samsung share decline is “excessive” and will maintain an upbeat outlook on the top smartphone producer that is poised to further expand its lineup in the late second and third quarters with the Galaxy S4 mini, Galaxy S4 Active and Note 3.

According to the IBK analyst, Samsung shares dropped by more than 5 percent 22 times over the past decade and only five times did Samsung see its shares underperform the Kospi by nearly 4 percent. And out of those five, only two, including the most recent case, were unrelated to Samsung’s official announcements.