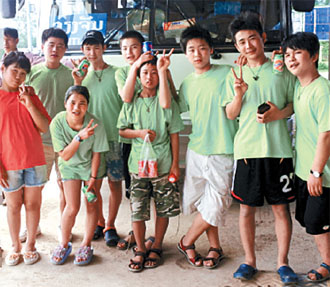 The nine defectors shortly before they were caught by Laotian officials and deported on May 28 back to North Korea. The photo was taken by a missionary who helped them defect and released by former lawmaker Park Sun-young. [NEWSIS]

North Korea is trying to get a propaganda coup out of the tragic story of nine young defectors who were forcibly repatriated after attempting to reach South Korea by escaping through China and Laos last month.

The authorities in Pyongyang are allegedly photographing them in happy settings, supposedly to demonstrate their readjustment to “normal life” in North Korea, North Korean sources said.

The nine youths, aged between 15 and 23, have been photographed by North Korean newspapers and broadcasters at the Rungna People’s Pleasure Ground, an amusement park with a swimming pool and miniature golf course that opened in Pyongyang a year ago, and the Taesongsan Funfair, another theme park at the foot of Mount Taesong, according to Kim Seong-min, founder and head of Free North Korea Radio. This was confirmed by several other sources.

“They are staying near Pyongyang Sunan International Airport,” Kim said.

As of yesterday, the pictures had not surfaced in the media.

“It appears that North Korea wants to show its changed image after Kim Jong-un came to power by taking the youths to newly built amusement parks around the city of Pyongyang,” a government official told the JoongAng Ilbo. He said that it was likely the young defectors, seven males and two females, will “confess their guilt [of defecting] though a press conference or some other publicized event.”

It is an extraordinary propaganda attempt for the North. In the past, defectors who have voluntarily returned to North Korea have been used in propaganda, but never defectors who were forcibly repatriated from China or other countries. They usually face very harsh punishment including imprisonment or death.

It coincides with other attempts by Pyongyang to look more reasonable to the outside world, including the working-level talks with South Korea last weekend in the border village of Panmunjom that led to an agreement to have higher-level talks, which were aborted at the last minute Tuesday.

North Korea experts have said it’s likely the repatriated youths will be forced to claim they returned to North Korea of their own free will.

In fact, the nine defectors crossed the border with China from North Hamgyong Province to escape hunger and starvation. They ended up in the Chinese city of Dandong, bordering North Korea, for around a year with the support of a Korean missionary couple.

Early in May, they headed for the border with Laos in an attempt to eventually apply for asylum in South Korea. But they were detained by Laotian officials on May 10.

Laos handed them over to North Korean agents on May 27, who flew them to the Chinese cities of Kunming and Beijing, and eventually to Pyongyang on May 28.

South Korea’s embassy in the Laotian capital of Vientiane and the Ministry of Foreign Affairs in Seoul were blindsided by the swift operation to repatriate the young defectors. The North Korean agents prepared passports for the nine defectors and tourist visas for China.

Last Wednesday, after more than a week of silence on the issue, a North Korean Red Cross spokesman said the nine defectors were secure and “will be able to pursue their hopes and future dreams.”

Ruling and opposition lawmakers Wednesday and yesterday criticized the incompetence of the diplomatic measures taken by Seoul.

“The way the defectors were repatriated to the North revealed the deficiencies in our diplomatic efforts and intelligence channels,” ruling Saenuri Party Representative Sohn In-chun said at the National Assembly Wednesday.

“In order to prevent a repeat of the situation, not only does the attitude of our diplomatic officials abroad in regards to defectors need to change, but there needs to be a complete overhaul on how to deal with defectors.”

She also said the issue must be put on the agenda for the Beijing-Seoul summit to take place later in the month between President Park Geun-hye and President Xi Jinping.

Opposition Democratic Party Representative Shim Jae-kwon said yesterday, “Some 90 percent of our defectors come via Laos. This is an important location.”

Despite speculation last week that Foreign Minister Yun Byung-se planned to meet with his Laotian counterpart on the sidelines of a two-day ministerial-level Forum for East Asia-Latin America Cooperation to be held in Indonesia that ends today, a meeting was not scheduled because the Laos foreign minister didn’t attend the forum, said the Korean Ministry of Foreign Affairs.