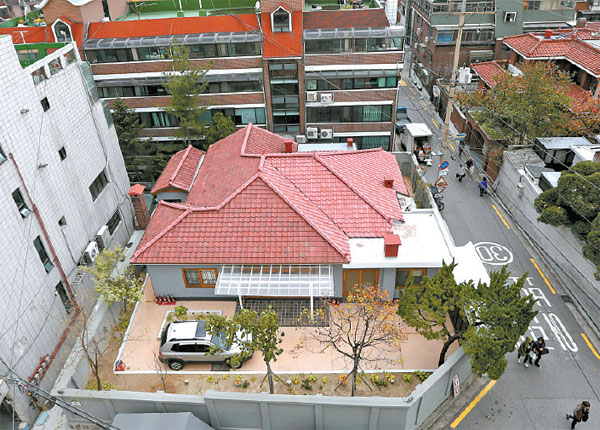 The old house of late president Park Chung Hee in Sindang-dong, Jung District, Seoul. The Jung District Office plans to turn the house into a memorial park. By Ahn Seong-sik

The Seoul Jung District Office is under fire for pushing ahead a plan to create a memorial park for the father of President Park Geun-hye, which Park herself called a misuse of taxpayer money.

Earlier in the month, Choi Chang-sik, head of the Jung District Office, said that the office will create a memorial park for Park Chung Hee, late president and father of current President Park, on land in Sindang-dong, central Seoul, where the late president’s old house is located, by investing about 28.6 billion won ($25.3 million).

The local government said it will purchase three or four buildings along with Park’s house to create a 4,070-square-meter (1.01-acre) park.

When the plan was reported in the media last week, the political arena, especially on the liberal side, strongly criticized the idea.

Lee Ji-an, deputy spokesperson of the Progressive Justice Party, said, “It isn’t right to build a memorial park on the place that brings up memories of the May 16 military coup.”

Park’s family lived in the house from May 1958 to 1961 and Park staged the coup on May 16, 1951. The house is currently owned by the Yook Young-soo memorial association.

Yook is the wife of late President Park. She was assassinated at the National Liberation Day celebration.

After Park Chung Hee was assassinated, Park Geun-hye lived in the Shindang-dong house until she moved to Seongbuk-dong, northern Seoul in 1982.

Due to the controversy over the issue, the president gave her stance on the project during a meeting held in the Blue House on Monday.

“I heard that the Jung District Office wants to create a memorial park in the area where my father’s house is located,” Park said. “But when we consider the current economic conditions, I don’t think it’s right to build it by spending billions of won of taxpayer money.”

But the head of the local government said he will continue to carry out the plan.

He appeared on a MBC’s radio program on Tuesday, saying, “The house has great historical value. I think it is important to show a cultural asset that is related with the incident [May 16 military coup] that impacted the country’s modern history.”

Choi added that about 89 percent of the funding for the project will be spent to create the park and an underground parking lot and only about 1.6 billion won will be spent on remodeling the late president’s house.

“Since the Park Geun-hye administration was established, a series of commemoration projects for Park Chung Hee have been announced by local governments all over the country,” Kim Jung-hyun, spokesman of the DP said.

“Such tax-wasting projects that aimed to attract interest from voters who still support the late president should be terminated.”