Ryu helps cause with first triple, but Dodgers fall

Ryu helps cause with first triple, but Dodgers fall 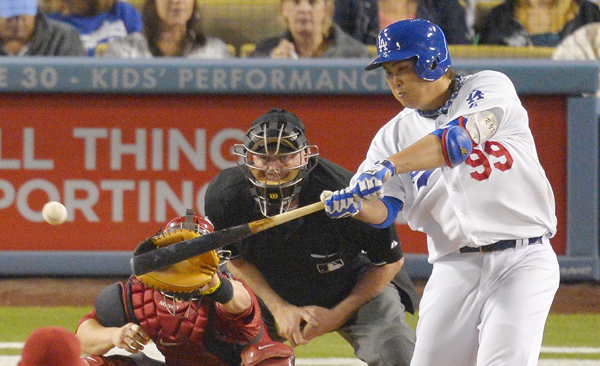 Despite pitching solidly and hitting his first career triple during the Los Angeles Dodgers’ four-run, fifth-inning rally against the Arizona Diamondbacks yesterday in Korean time, Ryu Hyun-jin couldn’t pick up the victory.

Ryu gave up three runs over six innings before being relieved by Chris Withrow as the Dodgers’ were leading, 4-3. But, the rookie reliever allowed a game-tying run on three consecutive hits in the seventh, blowing what could have been Ryu’s seventh victory of the season in 13 starts.

It’s the second time in a row that Ryu has had a no-decision. He allowed a run on six hits over seven and two-thirds innings against the Atlanta Braves last Thursday, but was relieved with the score tied at 1-1 in the eighth inning.

Martin Prado had two RBIs, including a run-scoring double during a four-run 12th inning, to help the Diamondbacks win, 8-6, at Dodger Stadium.

Ryu managed to record his 11th quality start of the season yesterday. Only 12 others in the National League have recorded 10 or more quality starts this season, including the Dodgers’ ace, Clayton Kershaw. He allowed 11 hits, his season high, and his ERA rose from 2.72 to 2.85.

Ryu has pitched 85 and one-third innings in 13 games and has already completed half of the minimum innings required for an ERA or wins title. Under his $36 million, six-year deal with the Dodgers, he could leave the Dodgers after five years if he pitches 750 innings in that time.

The first-place Diamondbacks improved to 8-2 in extra innings - 6-1 on the road - this season, and are 17-7 at Dodger Stadium since 2011, the best record among NL West opponents. They clinched their fourth consecutive series win over the Dodgers.

There was no repeat of the brawl that occurred in the seventh inning of the Dodgers’ 5-3 victory a night earlier, when six players and coaches were ejected. No batters were hit by pitches this time.

Eight of the nine games between the teams this season have been decided by three runs or fewer. The Diamondbacks had 20 hits while improving to 7-2 against the Dodgers. Seven of their hits were singles, tying for the most in franchise history.

Prado put the Diamondbacks ahead, 5-4, with a ground-rule double to left field off Ronald Belisario (3-5), who was charged with four runs and three hits in two-thirds of an inning. He walked two and didn’t retire any of the four batters he faced in the 12th.

Arizona made it 6-4 on Cliff Pennington’s bases-loaded RBI single off Brandon League, the Dodgers’ seventh pitcher. League gave up four runs over two-thirds of an inning in Los Angeles’ 5-1 loss in the series opener Monday.

Josh Collmenter (3-0) got the win with two innings of relief. He gave up one hit and struck out two.

In the bottom of the 12th, Yasiel Puig scored on a groundout by Mark Ellis. With two runners on, Bell retired pinch-hitter Tim Federowicz on a grounder to end it.

Arizona tied the game at 4-all on Miguel Montero’s RBI single in the seventh.

Diamondbacks starter Patrick Corbin had a 3-0 cushion when he gave up five consecutive hits with two outs in the fifth, allowing the Dodgers to take a 4-3 lead.

“I just couldn’t get that third out in the fifth,” he said. “It was just one of those things where any pitch I threw got hit.”

Hernandez had an RBI groundout that scored Juan Uribe, who led off with a double.

Ryu tripled to deep right field - and Parra misplayed the ball as it skipped past his glove. That drove in Alex Castellanos, who reached on a ground-rule double and went to third on Montero’s passed ball.

The Dodgers tied the game and went ahead on RBI singles by Nick Punto and Adrian Gonzalez.

The Diamondbacks took a 3-0 lead in the fourth. Prado and Didi Gregorius had RBI singles before Prado scored on a double-play grounder by Pennington.

Although he left the game trailing, Corbin remained undefeated in 13 starts after giving up four runs, tying his season high, and eight hits in five innings, his shortest outing this year.