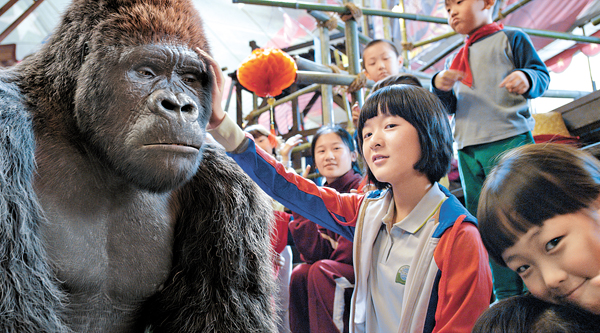 Actress Xu Jiao stars in “Mr. Go” along with Ling Ling, a computer-generated gorilla with a knack for baseball. Provided by ShowBox

Third time’s the charm, so the saying goes. And the old adage is exactly what director Kim Yong-hwa and actor Sung Dong-il are banking on as they look to release yet another collaboration, “Mr. Go.”

Although this time around, they’ve also recruited the help of a gorilla and a young Chinese actress.

If the film is a success, it could put Korea on the map as a leader in 3-D, giving Hallyuwood more ammunition in its quest for airtime on the international scene.

On a personal level, too, Kim has put his name on the line by casting a virtual 300-kilogram gorilla as the lead alongside a 12-year-old with whom he doesn’t even share a common language.

The plot, based on “The 7th Team” by Heo Young-man, is touching enough: young Chinese circus master Wei Wei (Xu Jiao) tries to save her deceased grandfather’s circus by putting her hopes in a gorilla named Ling Ling, who shows a streak of talent in baseball.

The venture also takes the master and creature from their native land to Korea where the two come up against a few curve balls.

Hailed as Asia’s answer to Dakota Fanning, child actor Xu kicked off the promotional tour in Seoul with a cheeky intro: “Ling Ling couldn’t attend because he had a big game to go to.” But her charm seemed to make up for his absence as she joked with reporters and showed her fondness for Korean colleagues and her co-star’s young son Sung Joon.

When asked about her favorite actor, Xu picked Sung’s son while also saying she was a fan of Moon Geun-young’s work. 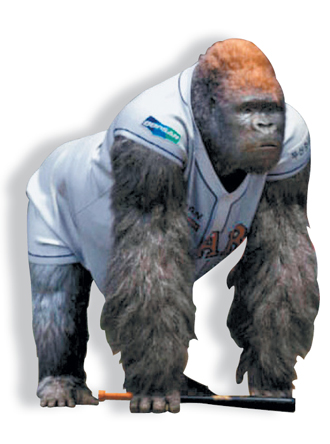 Sung quipped back by saying he had no objections to welcoming Xu to the family “because she definitely earns more money than my son at this point.”

Although being on the set was “fun” thanks to her goofy co-star, Xu did say that acting in a foreign language has its challenges.

“I don’t know if it’s a Korean thing, but the director would always show me what he wanted me to do by acting it out first,” Xu said on the helpful hint that touched and motivated her to do a better job.

Working with animals is always a risky move, and doubly so if the animal in question doesn’t exist. Nevertheless, Kim said he drew inspiration from Christian, a lion cub that first made news when after being adopted by two men he created a bigger stir with a touching reunion on camera.

Although he made sure that his uncertainty went undetected on the set, Kim admitted he was worried for his actors.

“I did worry for Xu, in case the film wouldn’t do to well,” he said.

And unlike Xu, Kim said working with the ape was no walk in the park.

“His upkeep was 12 billion won, making him the most expensive actor I’ve worked with,” joked the director. But working with an unseen actor did enable him “to improvise and to keep stretching the limits [of his mind] to make the film work.

“To map out his character, I tried to do away with intellect and tried to tap into simple emotions,” said Kim, confirming rumors that he did indeed model the character on a “drunk version” of himself.

Sung said that acting alongside a gorilla he couldn’t see was a challenge.

“I had to imagine where his eyes would be,” said Sung, mentioning a particular scene where the two lock eyes and gulp down makgeolli (rice wine).

“If a third party saw it, they’d have thought I was mad.”

Crazy or not, it’s clear that Kim and Sung have a proven track record for success.

“I didn’t see him for more than two years after ‘200 Pounds Beauty’ and then he called me out of the blue and asked if I liked to ski before casting me in ‘Take Off.’ Then, two years after that, he calls me to ask if I like baseball.”

Sung joked that this would be his last collaboration with the director.

“During ‘200 Pounds Beauty,’ my wife got pregnant, and the same thing happened during ‘Take Off’ and again while filming ‘Mr. Go,’?” he said.

Whether this will indeed be the duo’s last piece or not, Sung said the experience of working with Kim was profound.

“The director asked me to risk everything for the project because that’s what he was doing,” said the father of three.

But Kim said the movie had already delivered, despite how it performs at the box office.

“Through Ling Ling, I was able to dream big and I lived each day as if it was my last during production, so I’m very thankful.

“I had a big budget and I felt obliged to show that a Korean film could stand its own.”

The film opens in Korea and China on July 17.