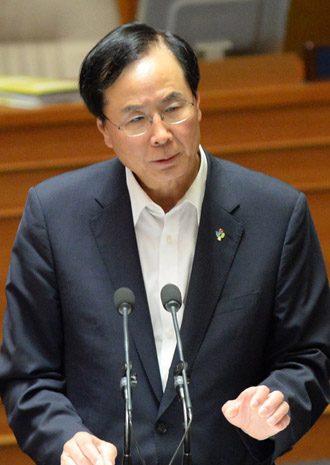 The government is rolling up its sleeves to combat unfair dealings between large companies and smaller contractors, blaming them for major drags on growth and job creation.

The move comes as the government and lawmakers are accelerating efforts to enact pending bills on economic democratization, including an attempt to strengthen punishments on violators of the fair trade law, in the special session of the National Assembly this month.

Fair Trade Commission Chairman Noh Dae-lae announced his antitrust agency will enhance monitoring and punishments on unfair practices that have long been pointed as a major cause of adverse effects on the nation’s growth.

“The act of demanding price cuts for small businesses further polarizes large and small companies, widening the gap between the rich and poor,” Noh said at a press conference in Gwanghwamun, central Seoul yesterday. “It makes it difficult for small businesses to compete in the same market, and accelerates contraction of the labor market, undermining the growth potential of the domestic market.”

“Small software developers have long been suffering unfair treatment compared to hardware manufacturers, since their products are intangible,” said Kim Seok-ho, director general of the business corporation bureau at the FTC. “But software developers are considered an important contributor for the creative economy, so the government is pushing for improvements for the industry.”

According to the commission, software companies sell their products and provide maintenance services as long as their clients use their programs. But they receive only 8 percent of actual prices of their services - too small to cover labor costs. Their primary and secondary contractors get only 2 to 3 percent of the profits.

For example, if a software company sold a 100 million won ($88,200) program, it earns around 8 million won a year for providing a maintenance service.

But its contractors who actually do most of the development work receive only 2 to 3 million won a year.

Companies that demand unfair price cuts from their primary, secondary and tertiary contractors will have to make compensations three times as much as the losses to the contractors, the FTC said.

“Demanding unfair price cuts is a felony that affects not only small contractors, but also the country’s economy,” Noh said. “The FTC will slap offenders with stronger punishments.”

The agency will introduce incentives for whistle-blowers at large companies who voluntarily report unfair practices taking place at their companies to the authorities on behalf of contractors. The measure is to prevent possible revenge of large companies against smaller partners when they make reports.

According to a recent survey by the Korea Federation of Small and Medium Business, more than 30 percent of 200 small contractors can’t report unfair price cuts because they are afraid of pressure from their clients. About 54 percent of them cited a possible decline in sales as a reason.

As part of enhancing the punishment, the FTC will accuse chief executive officers of companies that commit this wrongdoing from now on. Until recently, the agency only accused companies with prosecution and imposed fines not on individuals who actually ordered the action.