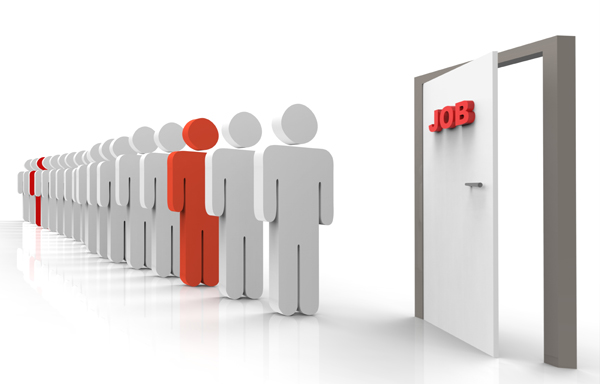 Just a week after she was elected as the 18th president of Korea, Park Geun-hye visited the Federation of Korean Industries (FKI), a business lobbying group representing the conglomerates known as chaebol, and one thing she asked of the nation’s largest companies was to create jobs.

Six months later, Park is asking conglomerates to actively follow the government’s job creation scheme. Most companies said that while they understand the agenda, they also feel pressure and economic challenges.

During her campaign, Park emphasized that her goal was to create new jobs, maintain existing jobs and raise the quality of all jobs. On June 5, the ministries of Employment and Labor, Strategy and Finance, and Science, ICT and Future Planning released a comprehensive job creation road map.

Their grand scheme aims to create 2.38 million jobs, including 930,000 part-time positions, to boost the employment rate to 70 percent by 2017. The government plans to spend 6 trillion won ($5.3 billion) and revise 34 laws to achieve the goal.

Experts applaud the goal to achieve 70 percent employment. According to data from the Organization of Economic Cooperation and Development (OECD), the average employment rate for countries with $30,000 per capita GDP is 69 percent. Korea’s rate has been stuck in the neighborhood of 63 to 64 percent for 10 years.

“Improving the employment rate is the best solution for chronic employment risks and social inequality,” said Choi Young-ki, a researcher at Gyeonggi Research Institute (GRI), in a recent report. “It is true that the new government’s policy for employment and welfare seems to be heading in the right direction with an abundant menu, but there doesn’t seem to be a strong will to accomplish the agenda.”

The government’s new road map for employment focuses on the public sector and creating “decent” part-time jobs. The government said it will lead by example by hiring part-time class seven or lower public servants starting next year.

State-run companies, especially those in energy, have been stepping forward to follow the government’s lead. According to the Ministry of Trade, Industry and Energy, 29 state-run energy companies will hire 4,287 people this year, a 21.8 percent increase from last year’s recruitment of 3,520 and about double the average annual recruitment during the past five years.

Some state-run companies doubled the number of jobs originally planned and offered them ahead of schedule. Korea Hydro & Nuclear Power (KHNP) hired 300 interns in April’s recruitment, triple what was originally planned. More than 90 percent of these interns will be made regular employees after training. KHNP said it plans to offer jobs to 880 people this year, and 67 percent of those will be opened by next month.

Alongside these efforts, experts point out that active participation by the private sector will be crucial for the government to reach its goals.

To encourage private companies to join the plan, the road map offers some incentives. It will give tax breaks and insurance support to companies that actively create part-time jobs and recruit. Such companies would also get advantages when bidding for government procurement projects. 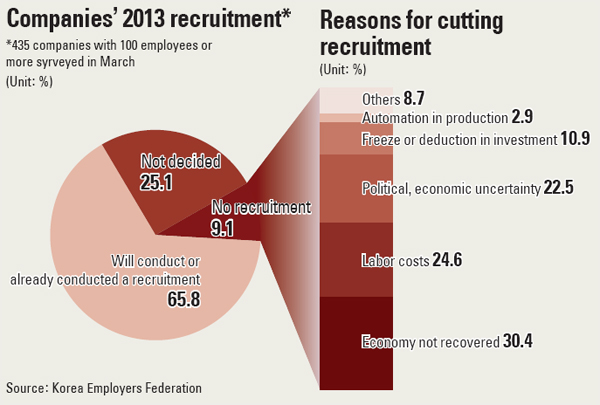 Experts say the success of the Park Geun-hye administration’s employment road map depends on the support of conglomerates. Positive involvement of chaebol will impact first- and second-tier suppliers and eventually cause entire industries to join the job-creation movement, they say.

So far, business groups that represent conglomerates and other employers have shown their intent to support the government plan.

“Through this road map, we expect to achieve growth, a virtuous cycle of employment and a better quality of life for Koreans,” said the Korea Employers Federation (KEF) in a statement last week. “The management world will also put forward its best effort to create jobs and achieve the 70 percent employment rate and also continue the employment discussion among labor, management and the government.”

According to a KEF survey, recruitment by conglomerates will grow 3.2 percent this year compared to 2012 despite the difficult economic situation. Samsung says it will make 26,000 recruitments, while LG Group expects to recruit 15,000. Those levels are similar to 2012.

Beyond increasing the number of jobs, some companies are committed to higher-quality positions.

Conglomerates also have shown a willingness to diversify their hiring to include groups like high school graduates, low income families and people with disabilities.

Hyundai Motor said it will pre-select 1,000 students from Meister High Schools, which are designed to prepare students for manufacturing jobs and other fields, for support and eventual full-time employment.

Some conglomerates will support job creation by backing new ventures.

Hyundai Motor Group, the nation’s largest automaker, said in March that it will earmark a combined 32 billion won over the next five years to create more than 2,500 jobs and support 500 new companies. 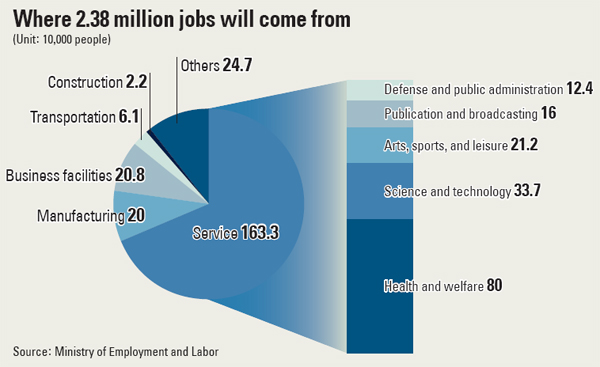 Despite offering various packages to create jobs, some companies say they still feel pressured and burdened.

“The size of our annual recruitment has been expanded from what we have originally planned,” according to a recruitment official in a top conglomerate who spoke on condition of anonymity. “It’s the starting phase of the new government and everybody wants to leave a good first impression with President Park.”

Industry insiders say Korean companies feel burdened not only by the difficult economic environment, but by the government’s shifting gears from “creative economy” to “economic democratization” when it comes to generating jobs.

Some officials say the government first urged corporations to focus on investment and expand recruitment, then created a “scary atmosphere” to force them to follow its job creation scheme. They cited prosecutors’ raids, investigations by the National Tax Service and punishments by the Fair Trade Commission.

“Job creation is a good goal that everyone wants to pursue, but in this kind of atmosphere, even if we came up with improved recruitment plan, others will see that plan as a gesture to avoid government ‘punishment,’ not as a genuine intent to help the nation’s economy,” says a spokesman from the nation’s top conglomerate.

As the situation gets tougher for conglomerates, Lee Seung-cheol, vice chairman of the FKI, said at a Monday press meeting that the government can achieve its goals through a “creative economy,” rather than “economic democratization.”

According to Lee, “economic democratization” would share jobs and business opportunities by regulating inter-affiliate transactions, but the “creative economy” would foster a new industry and business to create new jobs.

“Job sharing without job creation has no meaning,” he said. “If the creative economy grows, good jobs - full-time jobs and jobs with high wages - will increase instead of low-wage or temporary jobs.”

Experts say the government and companies’ agenda should be offering solid jobs with a future. The Korean Confederation of Trade Unions, one of the nation’s top two labor union organizations, criticizes the government’s employment road map as unrealistic and lacking detail.

“It seems the government doesn’t care about creating bad jobs as long as it helps achieve the 70 percent employment rate,” the KCTU said in a release.