Mystery of Merion starts to unfold

Mystery of Merion starts to unfold 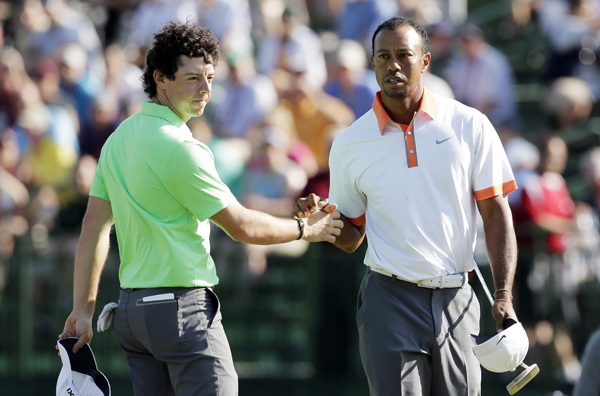 Rory McIlroy, left, and Tiger Woods meet on the 18th green during practice for the U.S. Open at Merion Golf Club, in Ardmore, Pennsylvania, Wednesday. [AP/NEWSIS]

ARDMORE, PENNSYLVANIA - The affection was genuine. Even better was beating Jack Nicklaus in a playoff. So when Lee Trevino got his hands on the U.S. Open trophy in 1971, the man who never lacked for one-liners gushed, “I love Merion, and I don’t even know her last name.’’

For this generation of stars Merion is more like a blind date.

No other course with four U.S. Opens has had to wait such a long time - 32 years - for another chance to test the world’s best players. Even with Tiger Woods back to No. 1 and winning at a ridiculous rate, so much of the talk at this major championship has been about Merion.

For years it was considered too small to handle such a big tournament or the big hitters with their modern equipment. And with soft greens from more than 6 inches of rain in the last week, the question is whether the course will yield the kind of scores rarely seen at the toughest test in golf.

On Thursday the mystery of Merion will start to unfold.

“It’s been how long, 32 years? And with all the technology since then?” Steve Stricker said as he headed to the first tee on Wednesday for a practice round. “Someone asked me the other day about someone shooting a 62. And what I wanted to say was, ‘you’re crazy.’ But you just don’t know. We don’t know what’s going to happen. And in a way, that’s kind of cool.”

Not so cool was the weather expected for the opening round.

Merion already took a beating last Friday when more than 3 inches of rain sent water over some bunkers and left small streams on fairways and greens. More rain on Monday closed the course three times.

The forecast predicted increasing clouds, gusts and showers on Thursday morning, with stronger storms likely to arrive around noon.

Whether a golf course is big or small, soft greens typically are a recipe for low scores. Then again, Merion is not a typical golf course.

It measures 6,996 yards on the scorecard - the shortest of any major championship in nine years - and has a stretch of seven holes in the middle that are short even by yesterday’s standards. Compare those holes with the scorecard from when Ben Hogan won the 1950 U.S. Open at Merion, and four of those holes were actually longer by a few yards in Hogan’s day.

Players typically reach for the wedge to chip out of the rough around the greens at the U.S. Open. At Merion, they could be hitting wedge shots into the green for their second shot on at least six holes. That’s what has caused all the clamor about low scores.

And with the rain, it’s reminiscent of how Congressional was vulnerable two years ago when Rory McIlroy shattered U.S. Open scoring records with a 16-under 268.

“I’ve been reading about how many scoring records are going to be broken,” Nick Watney said. “I’ve been around here once. And I think that’s insane. It’s funny to me. People look at the yardage and think it’s going to be easy. Even if it’s soft, the greens are sloped. The rough is thick. OK, we’ll have wedges into some of the greens, but that doesn’t mean you make birdie on all those holes. There’s enough tough holes to counteract that.”

Even so, the winning score has gone down in each of the four previous U.S. Opens at Merion, from Olin Dutra at 13-over par in 1934 to David Graham winning at 7-under in 1981, the last time this major championship was here.