Assembly’s question time is under attack

Assembly’s question time is under attack 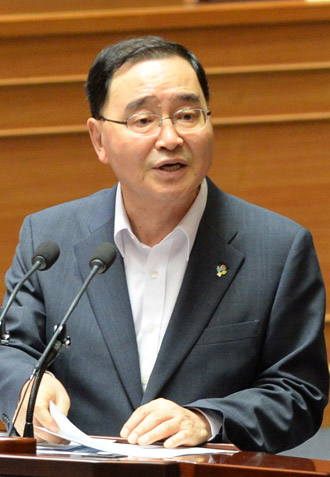 Skepticism is growing over the custom of National Assembly members grilling government officials as lawmakers continue to use the opportunity to embarrass rather than strengthen government oversight.

Yesterday was the final day in the June legislative session for lawmakers to ask questions to top officials of the Park Geun-hye administration. A shouting match broke out as Prime Minister Chung Hong-won was questioned by Representative Ahn Min-seok of the Democratic Party over a delicate issue involving President Park, former President Chun Doo Hwan and money he gave her in 1979. Other lawmakers in the chamber raised their voices to join the altercation.

“Do you know the name of the father-in-law of Chun?” Ahn asked.

Chung replied that he didn’t know. Ahn scolded Chung for failing to prepare properly for the session.

Ahn then started grilling Chung on money that Park received from Chun, the strongman successor to her father Park Chung Hee, shortly after her father’s assassination in 1979. During the presidential campaign last year, Park said she would return the sum, which was 600 million won ($528,816), to society.

“Converted to present day value, 600 million won is 3.3 billion won,” Ahn said. “Is it possible for President Park to repay the sum, which is larger than her total wealth?”

Chung responded that he couldn’t answer because Ahn was making a subjective calculation.

Ahn criticized Chung for answering half-heartedly, and the prime minister countered by saying in a raised voice, “You are making a political attack with such a unilateral calculation.”

The prime minister is known for his composure. Ahn riposted, “It’s so unlike you to get angry.”

During the altercation, lawmakers from the ruling Saenuri Party and the opposition Democratic Party shouted from their seats, creating a brief commotion inside the chamber.

Yesterday’s episode fueled concerns about the effectiveness of the National Assembly’s interpellation, although lawmakers have long been criticized for misusing the opportunity.

On Tuesday, Defense Minister Kim Kwan-jin faced a sensitive question from a ruling party lawmaker. Saenuri Representative Kim Jong-tae asked him if North Korean leader Kim Jong-un and other top commanders will be specific targets for attack if a war breaks out.

Kim hesitated to answer the question, saying the specifics are military secrets.

The question was asked on the eve of high-level inter-Korean talks planned for Seoul. Although the North called off the talks for other reasons, the timing of the Saenuri lawmaker’s question was still criticized by the Democratic Party.

“Since the two Koreas are trying to have a dialogue after difficulties,” Representative Lee Un-ju, a spokeswoman of the DP, said Tuesday, “lawmakers and the minister must act strategically and carefully.”

Many lawmakers think it’s time to overhaul the interpellation system.

“Instead of having a discussion, lawmakers are used to forcing their arguments onto others,” said Representative Cho Hae-jin of the Saenuri Party. “During the democratization period of the past, such a culture had legitimacy, but today, the legislature and the government should have substantial talks to win the people’s support.”

The Saenuri Party said it will improve the system starting in the September session.

Representative Choi Kyung-hwan, floor leader of the Saenuri Party, said the ruling party will seek to shorten the interpellation period in order to give more time to standing committees to deliberate bills. “Changing the schedule is always possible as long as the ruling and opposition parties agree,” Choi said.

“We are thinking about not holding the interpellation period at every legislative session and shorting the duration from four days to two days,” said Representative Yoon Sang-hyun, deputy floor leader of the Saenuri Party.

“We’re also considering giving a lawmaker only 12 minutes to ask questions,” he said.