Apartment dwellers have to be a little quieter

Apartment dwellers have to be a little quieter 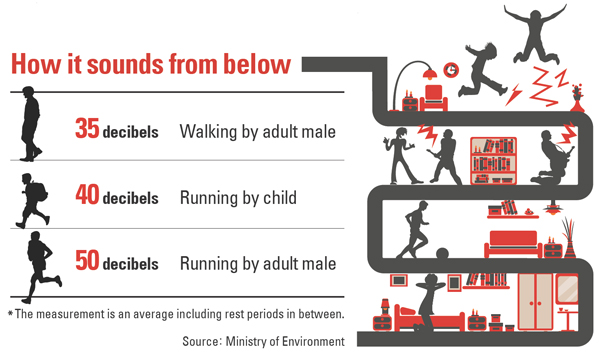 The government has announced stricter noise level standards for neighbors in apartments.

As a result, men might have to tiptoe around their apartments after 10 p.m. to avoid angry complaints and demands for compensation from the apartment downstairs.

Complaints about noise coming through the ceiling in apartment buildings have risen steadily in recent years, especially about noisy children.

The problem has gotten so bad that in May an elderly man in Incheon got angry over noisy neighbors and lit their apartment on fire, killing a visiting daughter and her boyfriend. During the Lunar New Year holiday this year, a 45-year-old man killed two brothers visiting their parents after an argument over noise in a Seoul apartment building.

Yesterday the Ministry of Environment announced stricter standards that went into effect the same day. The government will recognize a case of disturbance caused by inter-floor noise during the daytime if the decibel level of the sound coming through a ceiling exceeds 40 for a length of time. The previous standard was 55 decibels.

For sudden, isolated noises, the maximum allowed level is 55 decibels during the day and 50 at night.

The new standards are expected to dramatically increase the number of inter-noise cases recognized by the government and compensation demands. But some experts say the government has gone too far and may be prompting all-out wars in apartment buildings.

According to the ministry’s experiment, the sound of hammering a nail into a wall from the apartment below is 59-60 decibels, which exceeds the new standards for both day and nighttime. The sound of a male walking inside an apartment for a minute in his stockinged feet was 35.2 decibels, above the limit for 10 p.m. to 5 a.m.

The ministry’s tests were conducted in apartments built after 2005 with floor thicknesses of 21 centimeters (8.26 inches) or more.

“Neighborhood disputes over noise are likely to surge because lowering the standards by up to 15 decibels is a very big change,” said Kim Heong-sik, a professor of architecture at Honam University.