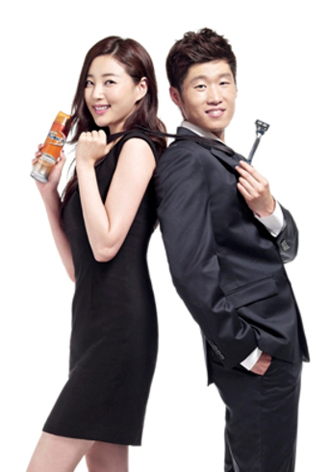 Footballer Park Ji-sung is rumored to be getting married to actress Kim Sa-rang of the 2010 drama “Secret Garden,” according to reports yesterday through social networking services, including Facebook and Twitter.

The rumor of their September wedding was first distributed among security companies a day earlier. It even says the names of the couple are listed on a reservation made at a local hotel.

The two got acquainted in 2011 while doing a commercial photo shoot together in the United Kingdom after being chosen as models for a razor manufacturer. Kim traveled to where Park was at the time.

In previous interviews, Kim said Park is cute when you get to know him, which is very different from the masculine character he shows during football matches. Her friendly comments prompted speculation about whether the two are dating.

Two years have passed since their first encounter, and in the meantime, many have continuously raised the possibility of a romantic relationship or even marriage.

However, Kim’s agency has strongly denied the rumors. It said the rumor is absolutely not true and they didn’t meet except for the times they shot photos together two years ago.

The agency said it had confirmed the details with Kim and added that it may consider taking legal action in the future.

The hotel that was mentioned in the rumors is said to have denied that the two made a reservation for a September wedding.

Kim made her debut into the entertainment industry in 2000 after she received the highest honor at the nationwide Miss Korea pageant. She has not appeared in any TV dramas or films since “Secret Garden,” and is said to be reviewing her future projects.