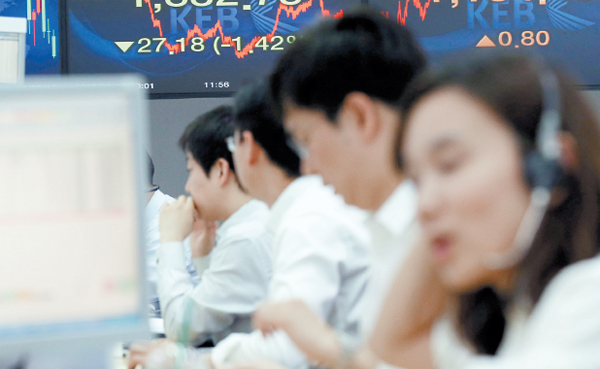 Traders work in the foreign exchange dealing room at Korea Exchange Bank in downtown Seoul on Thursday, when the stock market dropped to its lowest level this year. Yesterday, the won appreciated against the dollar. Media reports that some international investment banks and dealers have manipulated exchange rates worldwide for as long as a decade have Korean authorities on alert. By Kim Seong-ryeong

Responding to media reports of an international currency rate manipulation scheme, the government’s financial authority says it is impossible to rig won exchange rates inside Korea.

The Ministry of Strategy and Finance, which oversees the country’s international finance sector, said yesterday there is no possibility of manipulating rates since the local foreign exchange market is not open to foreign investment banks.

“The local FX market closes at 3 p.m. every day and opens at 9 a.m. the next day, starting exactly at the rate recorded at the previous closing,” said an official at the Finance Ministry. “Therefore, there is no room for foreign investment banks to intervene in the market to rig the rates.”

There was a rumor circulating that the authority embarked on an inspection of UBS and Citigroup operations in Korea. But the Financial Services Commission, overseer of the local foreign exchange market, yesterday said the rumor is false and it has no plans to investigate foreign investment banks.

If the alleged manipulation affected the U.S. dollar or Japanese yen rates, it is likely the won has been affected, too, experts say.

Bloomberg reported yesterday that global regulators may start overseeing currency rates in response to benchmark-rate setting scandals that began with revelations about the manipulation of Libor.?

According to the source, the U.K. Financial Conduct Authority, which oversees markets and prosecutes financial crimes, is looking into potential manipulation in the $4.7 trillion-a-day foreign exchange market after being contacted by a whistleblower in March.

The regulator sent requests for information to four banks, including Deutsche Bank AG and Citigroup, the source said.

The International Organization of Securities Commissions based in Madrid proposed in January that rates used in “currency markets, which can be represented by specific or aggregate benchmarks,” be subject to regular audits, stricter oversight from regulators and a code of conduct for submitters. The WM/Reuters rate would be included under this definition, Bloomberg reported.

The currency market, the biggest in the financial system, is one of the least regulated as it takes place away from exchanges.