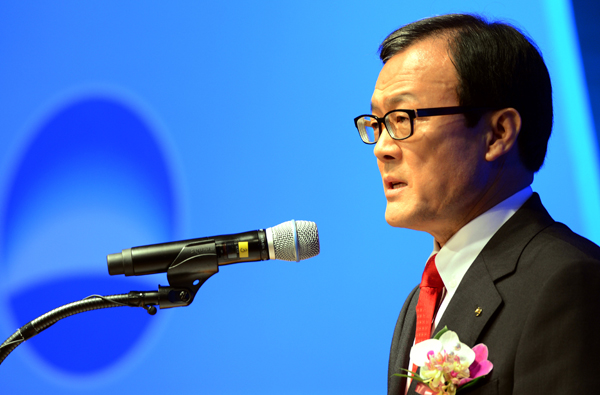 Newly appointed Chairman Lee Soon-woo said yesterday he will transform Woori Financial Group into a “small but strong” organization by streamlining its headquarters and affiliates.

“The group’s overall corporate value and competitiveness fell significantly because of the lack of a responsible management system,” Lee said. “[I plan to] transform the group into a small but strong organization by minimizing the authority excessively centered on the holding.”

The remarks by Lee, who also takes on the role of Woori Bank president, were part of his inaugural speech at Woori Financial Group headquarters in Hoehyeon-dong, central Seoul. Lee was named new chairman of the country’s largest financial holding company by assets last month. Former chief Lee Pal-seung offered to step down under pressure from the Park Geun-hye government on financial chiefs appointed during the Lee Myung-bak administration, according to insiders.

“[I] will successfully reach the goal of privatizing, which has been a long-cherished project, by raising the group’s value,” Lee said. “In order to do that, affiliates should boost their market dominance and competitiveness.”

In the meantime, former chairman Lee Pal-seung criticized the government for focusing too much on trying to privatize the financial group too quickly.

“The government is only focused on recouping state funds by privatizing Woori Financial instead of devising measures to develop the local financial industry,” Lee said. “Woori Financial is currently placed in the extreme position of possibly disappearing from Korea’s financial history.”

In addition to Woori Financial Group, chiefs of other financial groups have been replaced or are waiting to be replaced under the Park administration. This week, Yim Jong-yong, former head of the Prime Minister’s Office, began his term as new chairman of Nonghyup Financial Group, succeeding Shin Dong-kyu, who abruptly stepped down last month.

Last week, Lim Young-rok, president of KB Financial Group, was nominated as chairman of the group by outside directors.

He is expected to be officially named chairman and approved by the shareholders next month. Lim will succeed current Chairman Euh Yoon-dae, a close associate of former President Lee Myung-bak who announced he will not seek a second term once his first one ends in July.