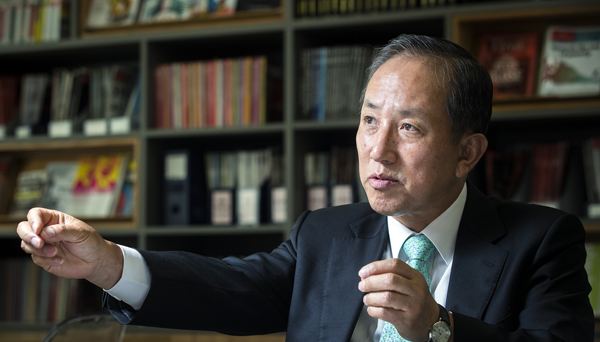 Kim Tae-young, former minister of national defense, has been appointed chair of the steering committee for a collaborative orchestra commemorating the nations that supported South Korea during the Korean War. The concert will be held at the demilitarized zone on July 27 and again in Busan on July 30.By Park Jong-keun

As the 60th anniversary of the Armistice Agreement of July 27, 1953, ending the Korean War approaches, a former defense minister shared the significance of an upcoming collaborative orchestra commemorating each of the nations that supported South Korea during the war.

Kim Tae-young, 64, former minister of national defense in 2009 and 34th chairman of the Joint Chiefs of Staff in 2008, sat for an interview with the JoongAng Ilbo at its headquarters in Seosomun-dong, central Seoul, last week, to discuss the situation with North Korea and to recall the war that divided the peninsula.

The concert, organized by the Korea War Memorial Foundation, will be held at the demilitarized zone, or the DMZ, the de facto border between the two Koreas, on July 27, and again three days later in Busan, at the UN Memorial Cemetery. Kim has been appointed chair of the steering committee for the symphonic concert.

After 40 years in the military, Kim resigned as minister in December 2010, following the sinking of South Korea’s naval ship Cheonan after it was torpedoed by the North, and retired.

“While U.S. and Chinese pressure has had a big impact on the recent change of behavior in North Korea, it is also a result of the Lee Myung-bak administration’s policy over the past five years of not yielding or being receptive to its provocations,” said Kim.

That day, Kim said he did some “gardening early in the morning before driving over” for the interview.

Since retirement, Kim lives in a countryside house in Yongin, Gyeonggi, taking care of a plot of land, but commutes to Seoul nearly daily for work.

While preparing for the peace concert, he also is establishing a dormitory-style high school for the children of military officials set to open next year.

“For career army officers that have to move every one or two years, their kids’ education is a big problem,” he said, which is why he decided to found such a school.

Q. What sort of performance can we expect from the joint orchestra of countries that participated in the Korean War?

A. There will be at least one musician represented from each of the 21 nations that participated in the Korean War. There will be 30 Allied Forces musicians performing and 30 Korean musicians to form a 60-member orchestra, accompanied by South Korean soprano Shin Young-ok and other world renowned vocalists.

Especially, the performance at Dorasan Station [the railway station in Paju, Gyeonggi, located in the DMZ and connecting the North to the South, which is currently not in operation] is like the eve of the anniversary of the armistice agreement.

On the day of the anniversary, in collaboration with the armistice anniversary events organized by the government, the Korea War Memorial Foundation has planned and organized the concert. The Ministry of Patriots and Veterans Affairs and Ministry Foreign Affairs have cooperated to include war veterans of the Allied Forces and government officials. The day’s celebrations hold significance because it is also open to the public to attend.

Three years ago, for the 60th anniversary of the outbreak of the Korean War on June 25, 1950, was there also a large-scale event? What’s different about this?

Abroad, most countries celebrate the end of a war more than the beginning of one. The outbreak of a war is not really a day that can be celebrated, after all. Through this celebration, we need to express gratitude toward the Allied Forces and the situation of the division in the Korean Peninsula to the international community and invited 400 war veterans from the Allied Forces. Originally, we wanted to hold the performance in the joint security area truce village of Panmunjom, but because North and South relations were not good, we chose Dorasan Station.

If North and South engage in talks, will it be possible to hold the concert in Panmunjom?

If the atmosphere changes by the end of the July, that is possible. But we will not put on the performance getting ahead of the reality of the North and South’s situation. The recent change in the North’s attitude is a realization that their provocations will not work anymore. We will no longer respond to the North’s threats by giving them their own way like in the past. That is in a way thanks to the Lee Myung-bak administration preceding the Park Geun-hye administration. It has played a decisive role over the past five years in order to correct North Korea’s habits.