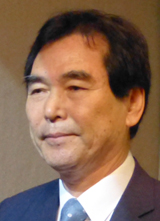 Ahn Sam-huan, a German language and literature specialist, received an order of merit from the German government Wednesday for his contributions to the academic and cultural exchanges between Korea and the European country.

Ahn, an honorary professor at the Department of German Language and Literature of Seoul National University, received the Federal Cross of Merit at a symposium hosted by the Alexander von Humboldt Foundation of Germany. The symposium took place from Wednesday till Friday at the Grand Ambassador Hotel of Seoul. Rolf Mafael, German Ambassador to Korea, awarded Ahn with the order on behalf of German President Joachim Gauck.

A former chairman of the Humboldt-Club Korea, Ahn headed various academic societies, including the Korean Comparative Literature Association, the Korean Society for German Linguistics and the Korean Goethe Society.

This year marks the 130th anniversary of the diplomatic establishment between Korea and Germany. According to the German Embassy in Seoul, various events to celebrate the bilateral tie will take place throughout the year, the international symposium hosted by the Alexander von Humboldt Foundation was one of them.

At the three-day seminar, 200 scientists and scholars from Korea, China, Japan, Germany and the United States as well as those who got scholarships from the foundation participated in the exchanges on various disciplines. ?