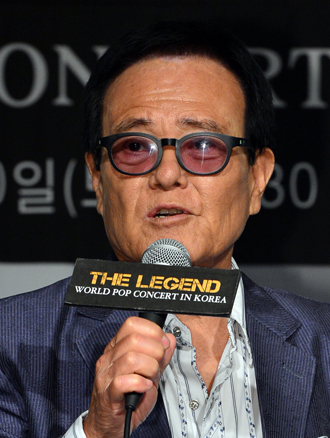 “It’s not only Korean citizenship I have acquired, but free subway access for the elderly,” said the formerly Korean-American Johnny Yune.

Indeed, he is 77 years old - old enough to take the subway for free, but not so old that he’s lost his quick wit and sense of humor. The comedian, actor and pioneer of the Korean talk show format will host the “World Pop Concert in Korea,” featuring old-school pop stars, including Gerard Joling, All-4-One, Anita Ward and F. R. David.

“I have lived in America for about 50 years and I want to contribute my experience to my native country. So I came here to settle down,” he said at a press event for the show at the Novotel Ambassador Gangnam, in southern Seoul, on June 5.

The concerts take place on August 9 and 10 at Yonsei University and August 11 at the International Convention Center on Jeju Island.

“I cast 15 superstars like Julio Iglesias by myself and hosted the pre-Olympic show at the Olympic Stadium before the 1988 Seoul Korea Summer Olympics,” he said. “I find many young people also like listening to classic music and this is a golden opportunity for old and young people to spend time together, enjoying the show. I think these kinds of events should be held more often.”

When asked about rumors that he will be appointed president of the Korea Tourism Organization, Yune said “I am willing to do anything that contributes to my country no matter what it takes, but I have never considered taking the position. I just want to enjoy the rest of my life as an entertainer.”

Sometime later this year Yune will host another talk show combined with a documentary that will shed light on the lives of Koreans who make their livings abroad.

Yune compared conditions in the media in the past and today: “Korea has progressed and changed tremendously. Especially the environment for comedy shows is totally different from the past. It is much better than the time I used to host the ‘Johnny Yune Show’ [1989-1990]. There was no freedom to express opinions. Every time I mentioned something about politics my director would cut it out. But it was one of my hobbies to read newspapers and write jokes about politics every morning. I lost my appetite for the show so I quit.”

He talked about concern for Korea’s lack of consideration for other people and the nature of jealousy, referring to the old Korean adage of “turning green with envy when a cousin buys land.”

“People don’t respect the president’s jokes, dismissing them as lame jokes. It was pathetic to see the media without any considerate mind-set. Have you ever seen any male presidents who throw out jokes in public? But she does. I think she deserves praise just for trying jokes even if they aren’t funny. We should support her, instead of criticizing her.”