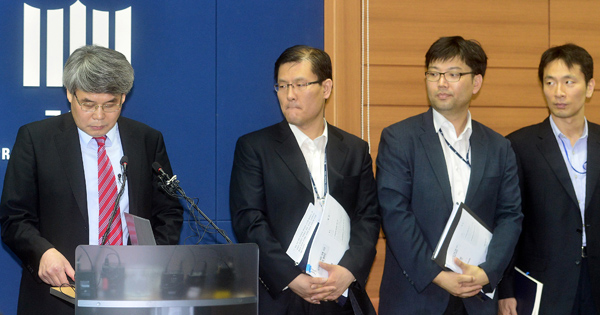 Lee Jin-han, left, a senior prosecutor from the Seoul Central District Prosecutors’ Office, announces yesterday the results of an investigation into allegations that the National Intelligence Service meddled in the presidential election campaign last year.[NEWSIS]

The Seoul Central District Prosecutors’ Office was scheduled yesterday to confirm an indictment against a former head of the National Intelligence Service for alleged interference in last year’s presidential election, for which they expected a pat on the back from the public.

But the prosecutors’ office found itself embarrassingly exposed when a local newspaper disclosed details of investigation results in yesterday’s morning edition, hours ahead of the official announcement set for 2 p.m.

The Chosun Ilbo ran a front-page story about the prosecution’s investigation of Won Sei-hoon, the former top intelligence official, and how he allegedly directed an illegal scheme to tarnish the reputation of opposition candidate Moon Jae-in and sway voters toward ruling party then-candidate Park Geun-hye.

The newspaper cited “an investigation report” by the central district prosecution that was submitted to the Ministry of Justice and the Supreme Prosecutors’ Office.

Prosecutor General Chae Dong-wook yesterday said an internal hunt has been launched to find the person who leaked the sensitive information to the newspaper.

“It’s deeply regrettable and deplorable that some of the investigation reference files have been leaked,” he said.

“[I] will treat this very seriously because it is a high-profile investigation that has drawn intense public attention and the result ended up being released slightly ahead of the official announcement,” the top legal official said.

“I ordered the launch of an internal inspection team to look into whether the leak is an inside job or not. [If an internal member is found guilty], the punishment will not be limited to just corrective measures,” Chae said.

The prosecution suspected that officials from a now-disbanded psychological operations bureau of the NIS conducted an online smear campaign against Moon in the run-up to the Dec. 19 presidential election.

Kim Yong-pan, the former head of the Seoul Metropolitan Police Agency (SMPA), was also indicted without physical detention along with Won on suspicions that he had interfered with a police probe to hush up the high-profile scandal.

A total of 1,760 postings on the Internet, which were written by nine agents under Won, were reviewed to determine whether the comments were politically motivated or not.

Of all the postings, 67 are considered evidence that the spy agency chief intended to meddle in the election.

Six posts include criticism of Moon Jae-in and independent candidate Ahn Cheol-soo while the rest mostly accuse the opposition Democratic Party of being “pro-Pyongyang.”

Later yesterday, the prosecutors confirmed that Won is charged with Election Law violation as well as breach of the agency’s internal code of conduct, which requires political neutrality for all of its members, during a press conference.

There was wide suspicion that Justice Minister Hwang Kyo-an wanted prosecutors to go easy on the embattled spy agency official.

It was the first major probe involving a political heavyweight under the Park Geun-hye administration.