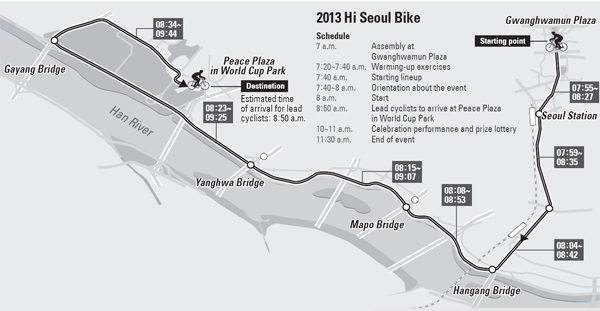 A cycling event for a campaign to save energy will be held at Gwanghwamun Plaza, central Seoul, on Sunday.

The 2013 Hi Seoul Bike, jointly hosted by the Seoul Metropolitan Government and the JoongAng Ilbo, is part of the city’s annual Hi Seoul Festival where about 5,000 cyclists meet at 8 a.m. and ride a 21-kilometer (13-mile) course going from Gwanghwamun Plaza to World Cup Park in Sangam-dong, western Seoul.

The event was first held in 2009. Sunday’s event will be the fifth. “Seoul has experienced power shortages in the past few years, especially during the summer,” Yang Wan-soo, a spokesman of the city government, said. “A series of small and big events related to the theme of energy saving will be held on the day.”

During the event, the city government will offer a free bicycle repair service and there will be a bike trick show.

Traffic will be shut down in some areas between Gwanghwamun Plaza and Sejongno from 6 a.m. to 7 p.m.

After participants leave the plaza at 8 a.m., a market with public and private enterprises will participate in selling goods at discounted prices.

The city government will accept its first 5,000 applicants by order of application via its Web site (www.hiseoulbike.com) until Saturday.

“It is an event where citizens can make themselves healthier by riding a bike and save power while riding through the city’s beautiful attractions,” Yang said.