Kim savors his moment at the U.S. Open

Kim savors his moment at the U.S. Open 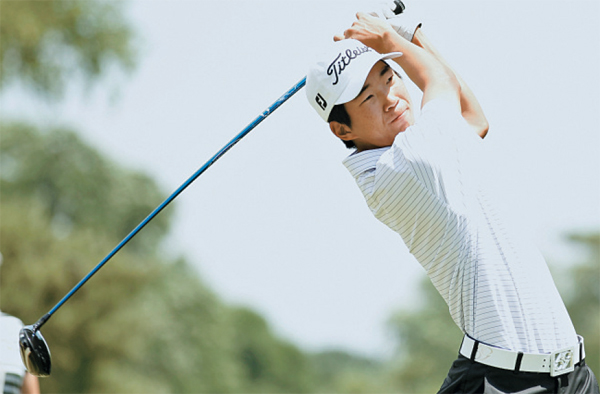 Korea-born amateur Michael Kim tees off Saturday during the third round of the U.S. Open at the Merion Golf Club. [REUTERS/NEWSIS]

ARDMORE, Pennsylvania - Nineteen-year-old amateur Michael Kim looked at the scoreboard at Merion’s 15th green on Saturday and smiled at the sight of his name listed two strokes off the lead during the third round of the U.S. Open.

Korea-born Kim, a University of California, Berkeley, student and winner of the Jack Nicklaus award as the top American college golfer, said it was the company he was keeping on the big scoreboard that made the moment special.

“I kept looking at the leaderboard, not because I wanted to know how I was doing in the tournament, but it was so cool to see my name next to names like (Phil) Mickelson, (Luke) Donald, (Charl) Schwartzel.

“It was just an incredible feeling.”

Kim birdied four of six holes from the 10th to be level par and within two strokes of the lead after 15 holes, but finished by sandwiching a double-bogey with two bogeys to slip to 10th, five shots behind third-round leader Mickelson.

That left Kim five strokes clear of the next best amateur in the field - 21-year-old Pan Cheng-Tsung of Taiwan - and did not diminish the teenager’s enthusiasm.

“It was a great day and it’s been a great week and I’m just looking forward to tomorrow,” said Kim, who played his round with 2006 U.S. Open winner Geoff Ogilvy of Australia and American Bo Van Pelt.

“I didn’t really know what to expect coming in, honestly, just wanted to make the cut. I thought that would be a pretty good week.”

Kim conceded that after gazing at the scoreboard, he could not help but fantasize about what it might be like to carry on and win the title.

“I kind of went through that ‘what if’ situation in my head,” said Kim.

“What if I won or what if I did this.

“But it was cool, and I tried to snap back out of it, but I hit an awful tee shot on the next hole.”

Despite the tough end to his round, Kim, who grew up in California, stood five shots better than his golf hero, Tiger Woods, who was nine-over par after a 76.

“Tiger’s been an idol of mine since I basically started golf, and if I do finish in front of him, great,” said Kim.

“If I finish behind him, that’s fine.

“Hopefully Tiger can win the British or something.”