Rhythm is a dancer

Rhythm is a dancer 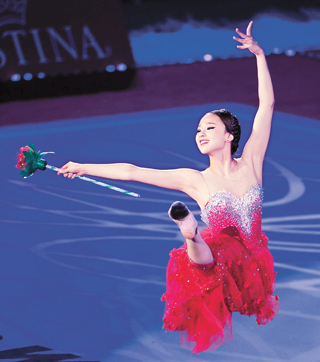 Korea’s top rhythmic gymnast Son Yeon-jae performs during the LG Whisen Rhythmic All Stars 2013 at Goyang Gymnasium on Saturday. During the two-day gala show that lasted through yesterday, Son showed off her rhythmic gymnastic skills to home fans along with invited foreign athletes such as Alina Maximenko of Ukraine and Melitina Staniouta of Belarus. Son, who dominated the Asian Championships earlier this month with three gold medals and two silver medals, will begin preparation for the Summer Universiade to be held in Kazan, Russia, next month. [NEWSIS]