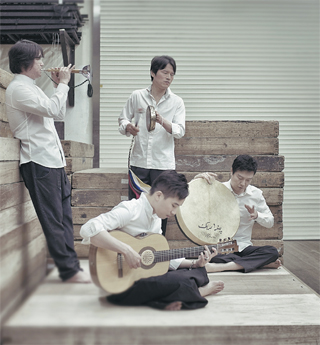 The Puri, a gugak band, will celebrate its 20th anniversary during the festival on July 5 and 6.

It’s been four years since the Yeowulak Festival, an annual festival organized by the National Theater of Korea, has been making efforts to prove that gugak, or traditional Korean music, is not a boring genre that attracts only the most patriotic Koreans. The festival has been offering traditional music in a nontraditional way by mixing gugak with other popular genres as well as offering more concerts by young gugak musicians.

“Collaboration” is the theme for this year’s festival, in which modern and traditional music artists collaborate on stage. The festival runs from July 3 to 27 at the National Theater of Korea in central Seoul. Each week for four weeks, there is a different theme, starting with “Legend” for the first week, “Challenge” for the second week, then “Crossover,” and finally, “Choice.”

“The core aim of this festival, like previous years, is to show the charm of ‘our music’ to a wider audience in Korea,” said the internationally acclaimed Japanese-Korean pianist Yang Bang-ean, the artistic director of the festival. “The concerts performed by the artists will be unlike their original repertoire with music that is unique to the Yeowulak Festival.”

During the “legend” week, the artistic director will collaborate onstage with a gayageum (a traditional Korean zither-like instrument with 12 strings) musician, Hwang Byeong-gi, and photographer Bae Byung-woo under the title “Oriental Scenery” as an opening performance.

“Three of us got together to try out the collaboration project and I was stunned myself because I never imagined it would turn out so well,” said Yang. “Bae has a lot of work that is very oriental. So we decided to call the concert ‘Oriental Scenery.’ ”

The Puri, a gugak band, is celebrating its 20th anniversary at the festival on July 5 and 6. The Puri started as a percussion group in 1993 but has transformed into a band by adding younger members like Jeong Jae-il, who recently won the Best Music Director award for the musical “Jesus Christ Superstar,” while some older members left the group. For the 20th anniversary, former and current members are collaborating to create “a totally new Puri style.” The four-member band will invite two former members.

“We’ve done more concerts overseas, such as in Japan, than in our home country,” said Kim Woong-sik, who plays percussion in the band. “We are anticipating the synergy the former and present members will be creating during the festival.”

During the second week, a documentary concert “Arirang, The Song of Life” will be staged by a gugak ensemble, Jeong Ga Ak Hoe. The arirang they will perform is Gangwon’s Pyeongchang version. During the concert, Kim Ok-nyeo, 74, and Kim Yoo-jin, 10, who are residents of Pyeongchang, will be invited to sing their “song of life,” the “Pyeongchang Arari.”

After three years of holding concerts and organizing music classes for Pyeongchang residents, Jeong Ga Ak Hoe ended up writing music for the town using Pyeongchang Arari, the original Pyeongchang version of arirang, as a theme. This became the group’s popular repertoire both at home and abroad.

“This concert at the festival will be a mix of documentary film and gugak. The experiences in Pyeongchang and its arirang gave us a feeling of regret that gugak needs to be treasured more and spread more. As a young musician doing gugak, I realized that I need to do something to make that happen,” said Cheon Jae-hyun, director of Jeong Ga Ak Hoe. “Pyeongchang’s arirang has its own story. It speaks for the lives of the Pyeongchang residents.”

On the third week, there’s going to be a gut performance, or the traditional rite of shamanism, in the form of gugak. Kim Jeong-hee, a gut artist, called hwalengi in Korean, was born to a family of shamans. He learned how to play jing (a large gong) at the age of 4 and began doing gut since 6. During the performance, which is held from July 16 to 17, Kim will collaborate with Australian jazz drummer Simon Barker and pianist Im Dong-chang to show how “gut and Western music harmonizes beautifully.”

During the final week of the Yeowulak Festival, the National Orchestra of Korea will be collaborating with vocalist Han Young-ae and Yang, the pianist and the artistic director of the festival.

“Around 2000, the division between Western music and traditional Korean music became faint through numerous collaborations and grafted work from musicians of all genres. The Yeowulak Festival is not limited to traditional music. We are just using gugak as the main ingredient of the festival and trying to let the public enjoy the music itself,” Yang said.

The 4th Yeowulak Festival runs from July 3 to 27 at various locations within the National Theater of Korea in central Seoul. Tickets for most indoor performances cost 30,000 won ($27), while outdoor performances are free. For more information, call (02) 2280-4114 or visit www.ntok.go.kr.