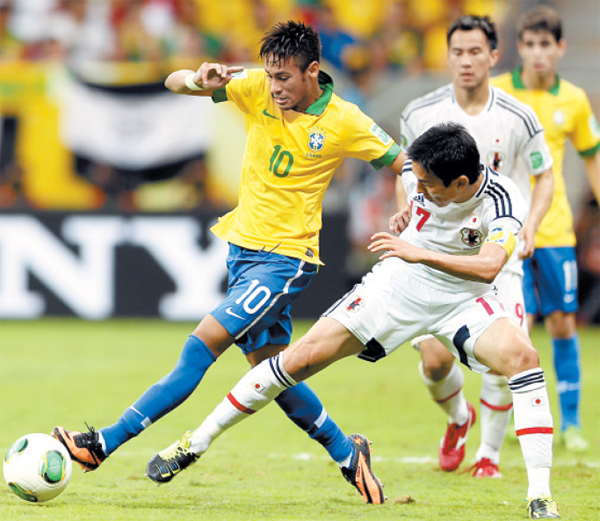 Brazil’s Neymar, left, is challenged by Japan’s Yasuhito Endo during the opening match of the Confederations Cup on Saturday at the National Stadium in Brasilia, Brazil. Neymar scored twice. [AP/NEWSIS]

BRASILIA - Only three minutes into the match, Neymar got the job done.

The Brazil striker scored early to help his team beat Japan 3-0 in the opening match of the Confederations Cup on Saturday, knocking in a firm shot from outside the penalty area.

Neymar connected with the ball after Fred controlled a long cross from Marcelo with his chest. The ball bounced only once before Neymar whacked it in.

“It was a very quick moment where Fred was able to control the ball and I was very lucky to get a fantastic kick and score a goal,” said Neymar, who went off in the 74th minute with what appears to be a minor injury.

For the two minutes following the goal, most of the 67,432 fans at the National Stadium chanted Neymar’s name, reveling in the knowledge that their poster boy is already starting to deliver for the national team with one year to go before the World Cup.

Paulinho added the second goal for Brazil in the 48th, deftly controlling a cross from Dani Alves before turning inside and shooting. Japan goalkeeper Eiji Kawashima got his hands to the ball, but it was too powerful for him to stop. Jo got the third, latching onto a through ball from Oscar and sliding it past Kawashima in injury time.

The win puts Brazil at the top of Group A with three points. Italy and Mexico will play in the other group match on Sunday.

“The reason we were not able to do what we normally do on the pitch is because we went one goal down in the third minute of the first half,” Japan coach Alberto Zaccheroni said. “This probably shocked us.”

Neymar entered Saturday’s match facing a minor wave of criticism. He has become something of an idol in Brazil, but a nine-match scoreless streak had heaped pressure on the 21-year-old striker heading into the Confederations Cup.

The fickle Brazilian fans, who had taken to booing their team in recent weeks, were firmly behind the “Selecao” and its star this time, however.

“We are building an environment that is even better than the one we had 15 days ago,” said Brazil coach Luiz Felipe Scolari, who led his national team to the 2002 World Cup title. “I believe this is something everybody wants for us to reach the final, and win it.”

With his hair long on top and short on the sides, Neymar has already started to transcend the game in Brazil, like David Beckham nearly everywhere else. His picture is plastered around the country in underwear and phone ads, to name a few. He has also appeared on Brazilian TV, appearing as himself in one of the country’s biggest soap operas.

That’s just off the field. On it, Neymar has earned himself a massive transfer from local club Santos to Barcelona, where he will be teammates with Lionel Messi next season.

The match against Japan was likely something Neymar was looking forward to. The Japanese have never beaten Brazil in 10 games, earning only two draws - both at the Confederations Cup, first in 2001 and then again in 2005.

The last time they played, in a friendly in Poland in October, Neymar scored two goals. This time, he was named “Man of the Match.”

Japan had its chances in the match, with Keisuke Honda getting some in the first half and Ryoichi Maeda had a couple in the second.

But Zaccheroni again said Brazil was a superior team to his, and wondered if it was the long flight to Brazil or Neymar’s quick strike that beat his team.

“Either the early goal we conceded made the team too worried or maybe the physical fitness was not enough,” the Italian said.

Not everything was perfect for Neymar on Saturday, however.

Midway through the second half, he was briefly knocked down.