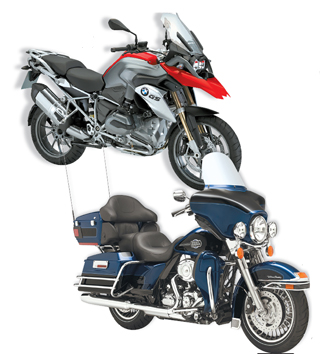 For the first time last year, imported cars exceeded a 10 percent share in the local automotive market. It was an achievement that took more than two decades since the Korean government officially allowed the importing of cars in 1987. Through May this year, imported cars were 12 percent of the local market.

If the nation’s leading automaker, Hyundai Kia Motor Group, is concerned, imagine the worries of the maker of two-wheeled vehicles, a segment that is seeing even faster growth in imports.

According to the Korea Motorcycle Industry Association (KoMIA), more than 15,000 imported motorcycles were sold in Korea last year. That’s an 83 percent surge compared to a year ago, when sales amounted to 8,223 units.

The market share of imported motorcycles expanded from 7.6 percent in 2010 to 20.3 percent last year.

The imported brands’ market share would be even larger if it included the brisk sales of Italy’s Vespa and Japan’s Yamaha, which are not members of the motorcycle association.

Among the imports, BMW Motorrad has seen the sharpest growth.

Hans-Christian Baertels, vice president and chief finance officer of BMW Korea, noted that BMW Motorrad accounted for 12.4 percent of the world’s large-motorcycle market (with engines of 500 cc or more). Korea is among three countries, along with Argentina and South Africa, where the market share of large motorcycles is more than 30 percent.

BMW Motorrad expects sales to improve further this year as it has already sold 464 bikes in the first four months of 2013. This was 100 units more than during the same period last year.

The company plans to step up its sales by releasing one of its key models with a low engine capacity, the C650 GT, in September.

The company’s motorcycle unit is adopting the same marketing strategy as its high-end vehicle unit. It dominates the market with top-of-the-line vehicles and then slowly widens its lineup into the lower-end. BMW Korea currently holds the top spot among imported vehicles.

Harley-Davidson, one of the best-known American brands on the planet, is a strong competitor for the German company. Last year, it sold 1,072 bikes. Through April, it sold 460 units, which is about the same increase year-on-year as that of its German competitor.

The rising sales of the U.S. “hogs,” as Harleys are nicknamed, were largely due to the free trade agreement between Korea and United States that went into effect last year.

“We immediately lowered the prices of our products when the FTA between the two countries took off and the government’s cut on special consumption taxes [to encourage spending] was implemented,” said a Harley-Davison Korea official. “And we hit the mark.”

Ducati also set its a record when it sold 200 motorcycles last year. The Italian sports bike further stepped up its game when it introduced eight new models in April.

“Unlike in the past, when [our brand] image as a racers’ motorcycle was extremely strong, nowadays ordinary bikers are also taking interest,” said a Ducati Korea official. “This year we are targeting selling more than 300 units.”

Japanese competitors are not sitting side-saddle. Honda and Suzuki, which have wider lineups than other imported brands - from 125cc scooters to bikes with engine displacements of over 1,000 cc - have also exceeded set records by selling 6,177 and 2,839 motorcycles, respectively.

Honda plans to increase sales of its small bikes by introducing the Super Cup. The Super Cup is one of Honda’s best-selling models with more than 76 million units sold worldwide since it was introduced in 1958.

The small bike is popularly used as delivery scooters that run through the streets and on the sidewalks of Seoul.

So why are imported bikes seeing strong growth?

“People who used to purchase sports cars as their second car are now turning to large motorcycles,” said a Harley-Davidson Korea official.

Additionally, price barriers on such large-size motorcycles have been falling recently thanks to various finance programs.

Such programs include paying only 100,000 won a month for a specified period of time and owning the motorcycle outright at the end of the contract.