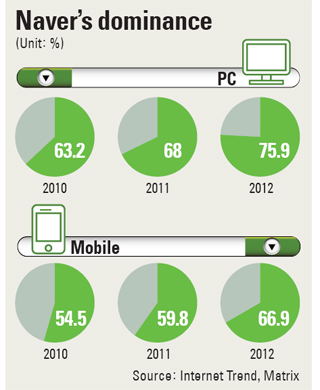 Supporting start-ups and building an entrepreneurship ecosystem are key pillars of the Park Geun-hye administration’s “creative economy” initiative, and the government recently announced it would offer tax breaks to established companies when they acquire start-ups.

However, many start-ups are skeptical about their prospects for acquisition or that their founders will get rich. In Korea, they say, established companies sometimes steal start-ups’ ideas or launch copycat businesses that quickly dominate the market.

At the center of the dispute is Naver, the search engine operator that has monopolized Korea’s Internet market with a share in excess of 70 percent.

In January, Naver came up with an alarm application called “Good Morning” that allows users to wake up to the voices of members of Girls’ Generation. The idea of using a K-pop star’s voice in an alarm app originated with AlarmMon, developed by Malang Studio, an app developer run by college students that won a prize at the “Global K Start-up” competition hosted by the Korea Communications Commission last year.

Earlier this year, a memo pad app called SomNote, from Wizard Works, another app developer, ranked at the top in terms of downloads at the Google Play app store. But Naver soon added features from SomNote. “What can a smaller firm do when Naver produces even alarm or memo apps?” said Wizard Works’ CEO Pyo Cheol-min, 28, recently on a KBS discussion show. 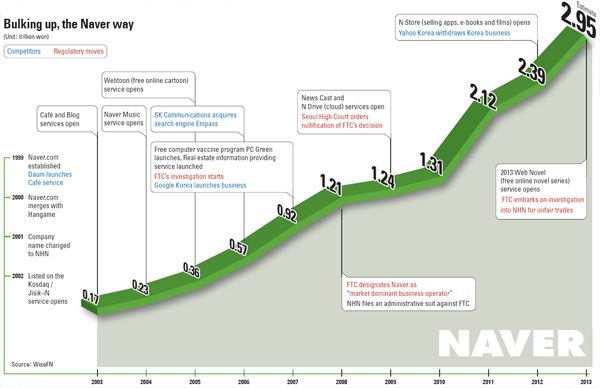 Naver’s growth strategy - usually launching a copycat business, instead of a merger or acquisition - acts as a clog in the pipeline of ideas flowing from the country’s entrepreneurial community. Industry insiders point to the monopolistic structure of the domestic Internet market.

Jimmy Rim, founder of K Cube Ventures, an incubation firm, says it’s not that Korean companies are bad and Google or Facebook are good because they do M&As. What really matters is whether the market economy is working in Korea and the United States. “In the U.S., IT firms rush to acquire promising start-ups for fear their competitors will snatch them up first,” he says. “But that kind of sense of tension never exists in Korea.” That stems from the fact that Naver virtually dominates the market.

“Being a copycat is a dishonor abroad,” says Nam Min-woo, chairman of the Korea Venture Business Association. “But Korean companies do not seem to feel any guilt nor is any penalty imposed on them. Laws and regulations should block the practice.”

When NHN, the mother company of Naver, was listed on the secondary Kosdaq in 2002, its market cap stood at 327 billion won ($290 million). Eleven years later, that figure is more than 43 times bigger at 14 trillion won.

In the past four years, Naver’s influence has grown ever larger. It not only directly launched a search-engine advertising business instead of hiring a smaller company, but also spun off online advertising sales and marketing departments to establish a subsidiary called NHN Business Platform (NBP). Through this company, NHN began running an information site called “Naver Real Estate” and the price-comparison site “Knowledge Shopping.”

With Naver diversifying its business on the back of its market dominance, Internet sites run by smaller firms in related fields see their profits decline. Advertising fees that companies paid to Naver climbed as NBP charged more. “Given that NBP is a subsidiary of Naver, we initially expected the premium we had to pay would go down, but the cost actually became higher,” says a businessman who has been running ads on Naver for five years. Since NHN established NBP in 2009, the mother company’s sales revenue surged by more than 1 trillion won. According to the advertisement almanac from Cheil Industries, Korea’s top advertising firm, NBP’s market share in search-based advertising stood at 71 percent last year.

Over the course of its astonishing growth, controversies over Naver dominating the search engine market and disrupting the Internet business community have been ceaseless, but the government’s reaction has been highly amateurish.

The Fair Trade Commission case is an example. When Pandora TV, an Internet video streaming site, filed a lawsuit against Naver in 2007, the FTC entered the investigation to determine if Naver engineered its system to block Pandora TV from adding advertisements to the videos on Pandora sites, which were searchable on Naver. Following the investigation, the antitrust body ruled that Naver “exploited” its dominant position as a search engine and ordered NHN to pay a fine of 200 million won. But Naver instantly fought back, hiring Korea’s No. 1 law firm, Kim & Chang, and filing an administrative suit with the Seoul High Court.

Within the company, Kim Sang-hun, then head of management control headquarters and current CEO, who previously was a judge on the Seoul Central District Court, took on the role of commander in chief in the legal battle. In October 2009, the Seoul High Court nullified the FTC order on the grounds that a portal site has a wide variety of services and the portal site Naver cannot be considered a “market dominating player” simply because of its dominance in the search engine sector. The FTC appealed and the case is still pending at the Supreme Court.

The Seoul High Court’s decision caused controversy in the market. Although it is true the portal sites offer a variety of services, the majority of its profits come from search-based advertising. The Korea Communications Commission also pondered designating NHN a market dominating enterprise in 2011, but that plan petered out when the commission head retired and the administration changed.

Most recently, the Ministry of Science, ICT and Future Planning was harshly criticized for promoting and supporting NHN. On May 6, while announcing measures to step up the country’s Internet security, the ministry said it would apply its self-developed software called Web Check, that screens for malicious code, to the Naver Tool Bar.

“You could be exposing your computer to malicious code when you download and launch a tool bar developed by a private company,” says an Internet security firm worker. “How thoughtless can the government be when it is encouraging the entire nation to use a product from a market monopolizer?”

Experts condemn regulators’ attempts to crack down on Naver’s activities as a dominant player. “Naver has brought in popular bloggers from other portal sites and launched Cafe (a membership based community with specific themes) service after seeing its competitor Daum Communications have a hit with the same service,” says Kim In-sung, professor of computer engineering at Hanyang University. “The Fair Trade Commission and Ministry of Science, ICT and Future Planning should come up with fundamental solutions to improve the situation.”

The FTC yet again entered into an investigation of NHN’s business transactions last month. “Given our past failure, we are trying to look into the company more closely with more detailed charges,” says an official with the regulator. The FTC also is checking whether NBP, its search engine-based advertising subsidiary, received illegal support from the mother company. Another FTC official says the agency intends to strictly prohibit Naver from stealing technologies or business models from smaller companies.

Lawmakers also are also moving to prevent Naver from perpetuating any illegal business practices. One measure being considered is applying the system of limiting the business of market dominators to the search engine sector. In the mobile communication sector, for example, a company like SK Telecom with 50 percent or more market share is subject to a variety of restrictions.