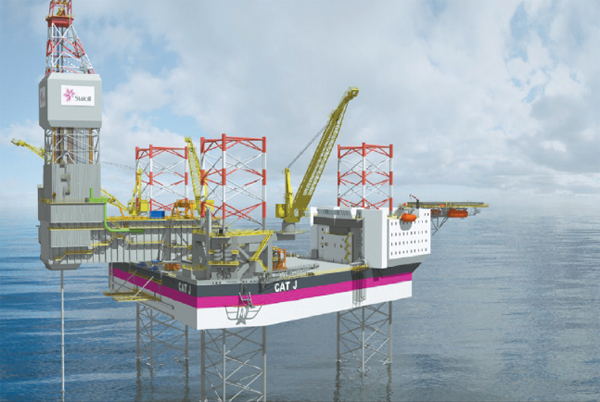 For at least 10 years, the jack-up rig, a mobile offshore oil drilling unit, has been missing from Korea’s shipbuilding industry. Local shipbuilders stopped winning orders to produce rigs in 2003.

Samsung Heavy Industries ended the drought last week by getting a $1.3 billion order to build two jack-up rigs for the Norwegian company Statoil.

Under the contract, Samsung Heavy will deliver rigs to Statoil by October 2016 for use as exploratory drilling platforms in the North Sea.

As in the case of Samsung Heavy, other big shipbuilders are either rediscovering plant equipment they paid little attention to in the past or developing ships with new shapes.

Small and medium-sized builders are focused on winning orders for midsize ships in which the big players have little interest. 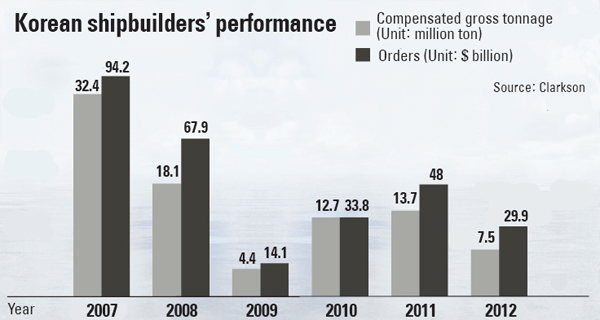 The jack-up rig operates in water as deep at 100 meters (328 feet) and is mostly used for oil exploration in the continental shelf.

Korean shipbuilders, known for cutting edge technology, had not paid much attention to jack up rigs because they have a low profit margin.

While a shipbuilder earns more than $1 billion for winning a contract to build a floating production, supply and offloading (FPSO) vessel and a drill ship that costs about $550 million, a jack-up rig delivers earnings of only $200 million, according to market observers.

Korean shipbuilders turned their interest to jack-up rigs as they scrambled to stay afloat.

According to Clarkson, the U.K-based shipbuilding market information provider, Korean shipbuilders won 7.5 million in compensated gross tonnage (CGT) in 2012, down 45 percent compared to 13.7 million CGT in 2011 due to reduced orders for value-added equipment coupled with falling vessel prices.

Such dire market conditions have forced Korean shipbuilders to seek out business opportunities they once shunned.

Over the past 10 years, jack-up rigs have grown bigger and become products that require higher-value-added production technology.

Samsung Heavy’s jack-up rigs for Statoil will be capable of operating to a depth of 10 kilometers (32,800 feet) in North Sea waters that can be as cold as minus 20 degrees Celsius (minus 4 Fahrenheit).

Hyundai Heavy Industries and Daewoo Shipbuilding and Marine Engineering also are paying attention to the market for jack-up rigs.

In 2012, Sungdong Shipbuilding and Marine Engineering became the first shipbuilder in Korea to successfully develop a tuna purse seiner: the 1,800-ton “Sajo Columbia” delivered to Sajo Group last July. Sungdong received a new order to build three tuna purchase seiners in October and is currently in discussions about projects with other foreign shipping companies.

Medium-range tankers, which weigh up to 50,000 tons, are targeted by small and midsize shipbuilders because Korea’s top three big builders have little interest. STX Offshore and Shipbuilding, Hyundai Mipo Dockyard and SPP Shipbuilding are dominating the niche market for the smaller vessels.

In the first quarter, Korean shipbuilders won 57 percent of worldwide orders for 1.8 GCT tankers, according to Clarkson.

Although centrifugal flow type gas compressors are a lucrative business with each costing more than 4 billion won and a global market estimated at $4 billion, the dominant players have been European, U.S. and Japanese shipbuilders.

“Given that lots of orders for LNG ships and drill ships - at which Korean shipbuilders excel - had already been placed, orders for such equipments will be less,” said Jeon Jae-cheon, an analyst at Daishin Securities. “Shipbuilders need to aggressively target niche products and diversify their product portfolios because we forecast the shipbuilding industry will not recover unril at least the fourth quarter of this year.”