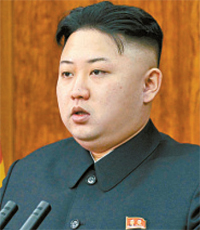 Following the aborted inter-Korean talks, Pyongyang has proposed a high-level bilateral dialogue with Washington, pledging to discuss denuclearization of the Korean Peninsula.

The National Defense Commission, the North’s top decision-making body chaired by Kim Jong-un, issued a statement in the name of an unidentified spokesperson yesterday proposing “high-level, government-to-government talks” with the United States, five days after they called off an official dialogue with South Korea.

“In order to ease tensions on the Korean Peninsula and realize regional peace and security, we propose high-level governmental talks between the DPRK (North Korea) and the United States,” according to a statement released by the official news outlet the Korean Central News Agency yesterday.

The possible agenda of the dialogue would include denuclearization of the Korean Peninsula, easing military tensions between the two Koreas and Washington’s “plan to construct a denuclearized world,” the statement read.

The matter of adopting the so-called “peace treaty” could be included, to end the armistice agreement that halted the 1950-53 Korean War, it said. The time and the venue for the talks can be arranged by Washington at its own convenience, the statement said.

North Korea has ratcheted up military tensions with South Korea over the past months with its third ever underground nuclear test in February and the long-range ballistic rocket launch in December 2012, both of which prompted a new round of sanctions against the regime.

The inter-Korean relations also deteriorated when Pyongyang abruptly pulled out its workers from a jointly run factory park in its territory, leading to a suspension of operations in May.

But North Korea soon walked away from the talks as it couldn’t reach an agreement in choosing their chief delegates with Seoul.

South Korea doesn’t have any nuclear weapons due to long-time restrictions on reprocessing of nuclear fuel under the Seoul-Washington nuclear treaty in 1974.

“This was not the first time that North Korea scrapped an inter-Korean dialogue and proposed talks with Washington,” a South Korean government official told the Korea JoongAng Daily by phone.

Lee Ho-ryoung, a senior analyst and director of the Office of Research Cooperation and External Affairs at the state-run Korea Institute for Defense Analyses in Seoul, pointed out that the North’s proposal for talks with Washington is similar to that for inter-Korean talks.

“When they proposed inter-Korean talks, they raised a variety of issues, and warned whether the meeting would be held or not depends on South Korea’s attitude,” Lee said by phone yesterday. “In this proposal to Washington, they also suggest a package of matters and said all further situations depend on Washington’s choices.”

The timing of the proposal is also similar. When Pyongyang proposed talks to Seoul, it was ahead of the Beijing-Washington summit. And the proposal to Washington is also ahead of the upcoming meeting between South Korean President Park Geun-hye and her counterpart Xi at the end of the month.

“Just like they did in the previous negotiation, Pyongyang is highly likely to blame Washington if negotiations for talks fail,” Lee said.

Glyn Davies, U.S. special representative for North Korea policy, said Washington would come to the negotiation table with Pyongyang only if the regime returns to its 2005 denuclearization agreement.

“First and foremost, the United States will not accept North Korea as a nuclear-armed state,” Davies said on Friday at a forum held in Washington by the Woodrow Wilson International Center for Scholars.

“We will not reward the DPRK for the absence of bad behavior.”

“We’ve long made clear that we are open to improved relations with the DPRK if it is willing to take concrete actions to live up to its international obligations and commitments,” he said.

The last high-level official meeting between Washington and Pyongyang was held in Beijing in February 2012 when they reportedly reached a breakthrough agreement - North Korea promised to suspend uranium enrichment at its facility in Yongbyon for the first time in exchange for 300,000 tons of food aid from the United States.

The agreement was soon nullified after North Korea launched a long-range rocket in April, which Washington and the international community saw as a disguised attempt to test its ballistic missiles for military purposes.