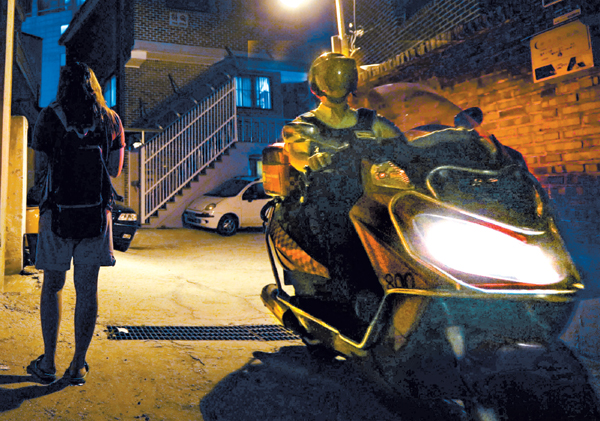 A college student returns home at night on June 8 in the studio village near Sookmyung Women’s University in Yongsan District, central Seoul. A worker from a private security company patrols on a bike to prevent crimes in the neighborhood.By Kim Sang-seon

“Get your hands off!”

A loud shriek came from an apartment in Seodaemun District, central Seoul, around 4 a.m. on May 19.

A 20-year-old university student was desperately fighting a man who broke into her house to rape her.

As she fought the invader off, later identified by his surname Lee, 30, he started hitting her in the face.

Blood spilled from her nose and mouth, but she didn’t give up, screaming louder, “please help! Please!”

The suspect soon feared people might have heard the woman screaming. 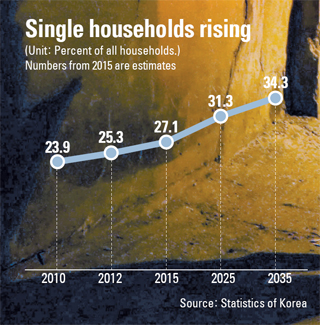 Lee fled, but the Seodaemun Police were able to arrest him on Thursday with CCTV footage from a camera installed in a convenience store close to the victim’s house.

“I just wanted to satisfy my sexual desires,” Lee told the police during questioning.

The suspect said he lives close to the victim’s home and planned the crime after he discovered she lives alone.

The number of single-person households has been increasing recently. According to Statistics Korea, about 25.3 percent, or 4.14 million, of the country’s dwellings are single households, up from 23.9 percent in 2010.

A 30-year-old woman who lived alone in Gangdong District, eastern Seoul, was raped by a 48-year-old man surnamed Jeong who previously came to inspect her apartment with a real estate agent.

After seeing she lived alone, Jeong waited for about an hour for her to come out of her apartment and then attacked her.

“I decided to do it after seeing her living alone,” the suspect later told the police.

The number of crimes targeting senior citizens, aged 65 and older, who live alone is increasing too.

In August last year in Mia-dong, in northern Seoul, a 78-year-old woman was found strangled to death. The police found signs of rape and later arrested a 38-year-old neighbor surnamed Roh.

He testified to the police that he committed the crime in a fit of anger because his girlfriend didn’t answer his call and he saw the victim’s door was left open. Roh was imprisoned for life.