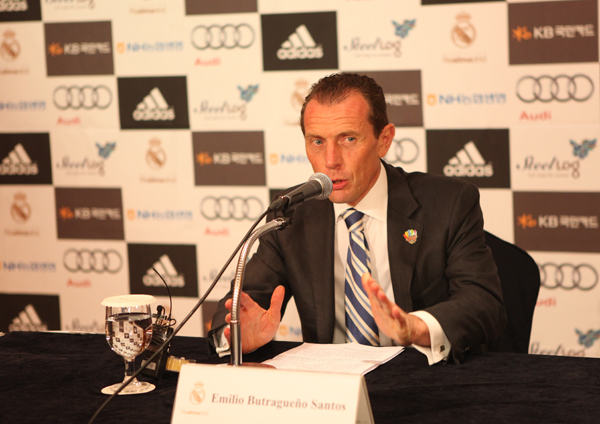 Emilio Butragueno says Korean football could improve more as its young players are making their names overseas. Provided by Passion of Sports

Korean football has a strength and a spirit that many teams would find difficult to beat, a Spanish football legend said yesterday.

“Korea is a competitive team,” former Real Madrid striker Emilio Butragueno said through an interpreter at a press conference in Seoul. “Over the past 20 years, Korean football has enjoyed a significant development. It is impressive that they are performing well in Asia.”

Butragueno, 49, now working as a public relations director for Real Madrid, scored 171 goals for the prestigious Spanish club in 463 matches between 1982 and 1995. He helped win the club six Spanish league titles and one UEFA title.

At his World Cup debut in Mexico in 1986 Butragueno scored five goals, winning him the Silver Boot award alongside Diego Maradona from Argentina.

Butragueno scored 26 goals for La Roja until his retirement from the national team in 1992. A decade later, when Korea seized an unlikely victory over Spain at the quarterfinals of the 2002 Korea-Japan World Cup, he was watching the match in Korea.

“Korea has a unique spirit and Spain lost to Korea during the 2002 World Cup because of that,” he said. “It would be difficult for other teams to beat Korea as long as it has that spirit.”

He said Korean football could improve more as its young players make their names overseas.

He declined to mention names, but said Real Madrid is keeping a watchful eye on some Korean players.

“Korean players are growing fast. The world’s eyes are focusing on Asia. Many clubs will try to hire more Asian players,” he said.

Butragueno was in Seoul to inspect a football youth academy launched by Real Madrid in Cheonan, South Chungcheong, in March, which made Korea the fifth Asian country to have a Real Madrid youth academy after Japan, China, the Philippines and East Timor. Real is in the process of establishing another one in Seoul this year, he said.

“I think our duty is to pull talents out of children and help them perfect it,” he said. He said that he will try to bring Real Madrid to Korea in the near future.