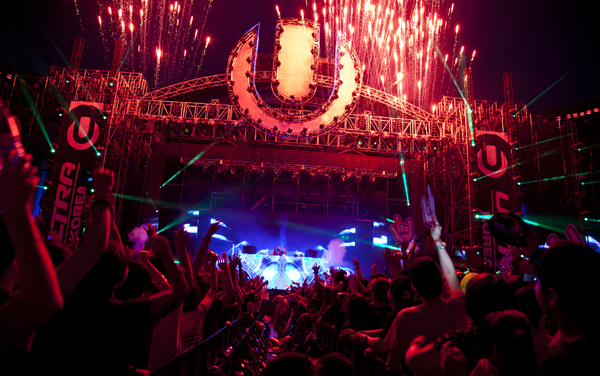 Concertgoers jump up and down along with music at Ultra Korea, which kicked off Friday for two days at the Jamsil Sports Complex in southern Seoul. Provided by the organizers

If it was rock music that attracted thousands of young Koreans in one place in the 1980s and 90s, now it’s electronic music that brings them in. About 100,000 young men and women - clad in colored clubbing wear from head to toe - swarmed to the Jamsil Sports Complex in southern Seoul on Friday night for Ultra Korea, the country’s biggest electronic music festival.

The two-day “party” is the Korean edition of the Ultra Music Festival based in Miami. After the success of last year’s festival, Korea’s first, which attracted about 500,000 people, more people anticipated this year’s festival. Its 100 VVIP tables were sold out two months ago, becoming the country’s electronic music clubbers’ biggest party of the year.

“I bumped into so many friends and got introduced to friends of my friends,” said Kim Min-sun, who says she’s a regular clubber. “It was like we borrowed the whole place for a party of our own.”

The weather was sunny enough during the day to heat up the attendants and cool enough during the night to keep them jumping up and down. This year’s festival drew about 20,000 foreigners, according to the organizers.

“Tickets were sold in numerous Asian countries nearby, including Singapore, Indonesia, Japan, China and Hong Kong,” said an official from the organizing committee.

This year’s lineup included some of the most in-demand DJs in the world. About 60 artists, including Armin Van Buuren, Carl Cox, Avicii, Afrojack and Kaskade, as well as artists from home, including the boy band SHINee, performed on three stages at the Jamsil Sports Complex.

The show by Armin Van Buuren, who has been topping the world’s top 100 DJs chart - which is being ranked by renowned electronic magazine DJ MAG - for five consecutive years, was especially popular.

Meanwhile, the feverish response from the Korean audience is known to be one of the major reasons for foreign artists wanting to come back. One of the headliners, Avicii, expressed his amusement via his Twitter after the festival saying, “Wow UMF Korea - one of the best shows of my life. Thank You.”

With Denmark’s Carlsberg as the sponsor, the two-day party which began about 3 p.m., couldn’t keep its “thumping” down until after midnight. When the festival ended after midnight, many young Koreans were spotted heading to clubs nearby to continue on with the festival mood.