Land minister says housing bills ‘have to be passed’

Land minister says housing bills ‘have to be passed’ 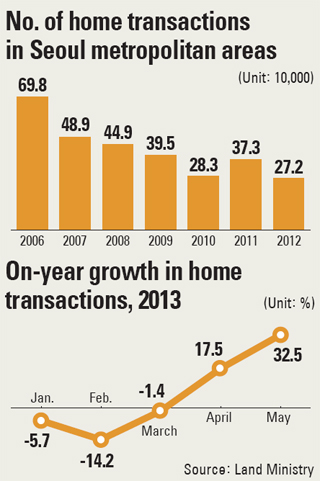 The clock is ticking as the government pushes for passage of two major bills to help boost the real estate market pending in the National Assembly.

June is a critical month for the government to enact the plan contained in its April 1 stimulus package.

Land Minister Suh Seoung-hwan argued Sunday that the bills to eliminate the upper cap on apartment prices and additional capital gains tax on multiple homeowners should be passed this month.

“There are worries over falling apartment prices in Seoul and nearby areas and the expiration of the acquisition tax cut,” Suh said. “But there are new measures in the April 1 plan to boost the market, which have to be passed by lawmakers this month.”

The two rules were created in the Roh Moo-hyun administration to contain bubbles in the housing market.

The upper cap on selling prices of apartments was introduced in 2007. For each house, the maximum price cannot exceed the sum of construction and land costs.

Suh repeated that the acquisition tax cut shouldn’t be extended after it expires at the end of the month.

In March, the acquisition tax cut was extended through June. The measure was introduced by the Lee administration Sept. 10 last year to revive the real estate market.

The Lee administration halved the tax from 4 percent to 2 percent for the last four months of 2012.

According to the Ministry of Land, Transport and Infrastructure yesterday, the housing market picked up in April and May after the government unveiled the April 1 plan.

The number of home transactions across the nation jumped 17.5 percent in April and 32.5 percent in May compared to a year earlier, the ministry said.

Last month, the total transactions recorded 90,136, the second-largest amount since May 2008.