Samsung Electronics is set to finally introduce its first, long-awaited organic light-emitting display (OLED) 55-inch TV in two weeks, according to a source familiar with the situation. The debut comes six months after LG Electronics unveiled the world’s first 55-inch OLED TV and less than two months after LG came up with a curved OLED TV the same size.

However, Samsung does not appear hyped about the impending launch of the new, next-generation TV segment that has been the industry’s center of attention for the past year.

Several rounds of rumors and speculation about the timing of the launch were wrong - the first being July last year in time for the London Olympics. Some industry insiders even predicted that Samsung wouldn’t release an OLED TV this year, citing low production yield and technological barriers.

Whereas LG has been outspoken about its OLED prowess - being first to get in the market - Samsung, the No. 1 player, seems almost disengaged.

“We do not put a big significance on the timing of OLED TV release,” said the source, who asked not to be named. “It is meaningless to concentrate on OLED TVs when UHD TVs are doing so well - especially given that the production yield for OLED TVs has been unsatisfactory, the product won’t turn a profit and won’t likely satisfy customers [in terms of quality due to the new product’s early stage of development].”

He added that Samsung’s focus has shifted to ultra high-definition (UHD) TVs for the time being. That marks a reversal in the company’s strategy, given that Samsung and other TV makers had initially unveiled UHD TVs as a stopgap measure until the release of OLED TVs. When LG became the first company to release a UHD TV - an 84-inch model with a price tag of $22,000 - Yoon Boo-keun, head of Samsung’s consumer electronics unit, underestimated the potential of UHD, saying it “has no value without content that meets the screen quality.”

But as demand for UHD TVs picked up, companies have moved away from a premium, large-size strategy to smaller-screen, lower-cost models.

Samsung, which previously had only an 85-inch UHD model, released 65- and 55-inch models this month. And it pulled the plug on the 110- and 95-inch models showcased at the Consumer Electronics Show in Las Vegas in January in anticipation of low demand due to the hefty weight and enormous prices. The 85-inch UHD TV from Samsung, costing over $35,000, is hugely popular in China and the Middle East, according to a company spokesman.

UHD TVs’s popularity is a development foreseen by neither Samsung nor LG just one year ago.

Market researcher DisplaySearch in the second quarter last year forecast UHD TVs would sell only 90,000 units this year, but last month revised that estimate to 930,000. Another market researcher, GfK estimates global sales of UHD TVs this year at 2.3 million.

UHD TVs are a type of liquid crystal display (LCD) TV with screen sizes between 55 inches and 110 inches. The offer four times the resolution of ordinary HD TVs, manufacturers say, promising the screen quality equivalent to that of the iPhone’s Retina display.

OLED TVs, by comparison, are known to promise sharper and brighter images than LCD models and to consume less power. They also are thinner as they don’t require a backlight. A 55-inch LG OLED TV, for instance, has a 4-millimeter-thick screen - Samsung’s Galaxy S4 flagship smartphone is 7.4-millimeter-thick - and weighs only 10 kilograms (22 pounds).

The two types use entirely different production mechanisms - with OLED being much more technologically challenging - and the price difference is huge.

Nonetheless, many experts say it might be difficult for many consumers to see the difference between images. 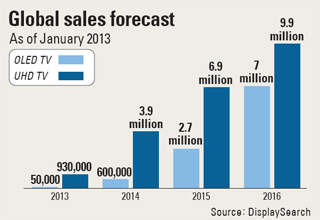 Both experts and TV industry insiders agree it will take time for the OLED TV market to develop. Paul Gray, director of TV research in Europe for DisplaySearch, in April cited manufacturing problems. “The factories are only getting one good [OLED] panel out of every 10 panels at 55-inches. Production problems are making it very, very tough,” he said. “There was a lot of hype about OLED last year and it will improve over time, but it will be painfully slow. OLED also has to fight a mature product such as LCD, which is going through incremental innovation.”

Hugo Shin, director of home entertainment product communications at LG, said in mid-April the company sold 200 55-inch OLED TVs in two months. But the company has provided no updated figures since.

And right now, higher sales would not necessarily be a good thing.

“The more OLED TVs a producer sells, the more money it loses because the production cost is so massive. Selling one such TV leads to a loss that goes beyond the actual price tag of the product,” said an executive with one of Samsung’s business partners, who requested anonymity.

Despite the situation, LG pushed forward with a bold move to add a curved OLED TV to its lineup last month. It “may be trying to occupy any potential territory available to its rival,” said Ken Park, an analyst with DisplaySearch, in his report in May.

An LG spokesman also said the move is part of the company’s efforts to grab any leadership opportunity in the high-end, next-generation TV sector. “You didn’t expect the LCD or LED TVs would be as widespread as now when people started replacing their brown-tube TVS a decade ago,” he said. “We are anticipating a similar scenario with either OLED or UHD TVs.”

What is certain is that bigger TVs are getting evermore popular, although house sizes in Korea have remained virtually unchanged. Samsung said earlier last week it sold twice the number of TVs with screens 50 inches or larger last year than it did in 2011. In the first five months of this year, sales of TVs in that size category were 83 percent more year-on-year.