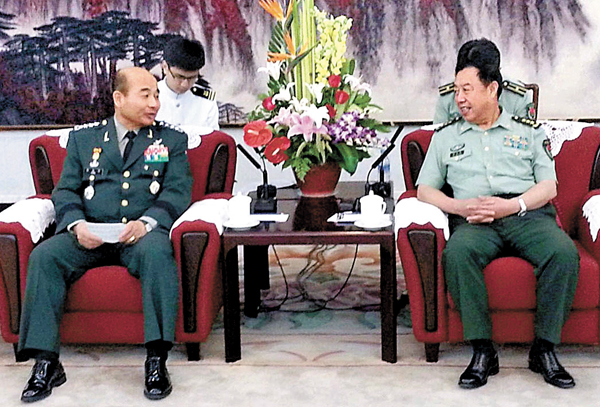 “Choe Ryong-hae, director of the General Political Bureau of North Korea, proposed Pyongyang-Beijing joint military drills during his visit to Beijing [in May],” a South Korean source familiar with military interactions between the two communist allies told the JoongAng Ilbo on Sunday.

“However, senior Chinese military officials reportedly expressed their reluctance toward that idea.”

“During his visit, Choe proposed the joint exercises in the name of building friendship, bilateral cooperation and their traditional diplomatic ties, but Fan Changlong, vice chairman of the Communist Party of China’s Central Military Commission, and Fang Fenghui, the People’s Liberation Army’s new chief of general staff, didn’t respond to the suggestion,” the source said. “It was apparently a refusal.”

China’s increasing coolness toward North Korea was also proven by its poor treatment of the North Korean delegation led by Choe.

Sources said China didn’t inform Choe about what time they could meet with Chinese President Xi Jinping. So Choe and his delegation had to postpone their flight returning to Pyongyang twice, on the last day of their three-day visit, and were forced to wait for the meeting at the guest house in Beijing.

“We detected a quite different atmosphere at the time,” a South Korean government official said. “Given the fact that North Korean delegates had been warmly received by China previously, China’s recent coldness was rare. Relations between Beijing and Pyongyang have been characterized as being as close as ‘lips and teeth.’”

In the meantime, Seoul-Beijing relations are improving. When Jung Seung-jo, chairman of South Korea’s Joint Chiefs of Staff, visited China in early June, the attitude of senior Chinese military officials was totally different from that toward the North Korean delegation. 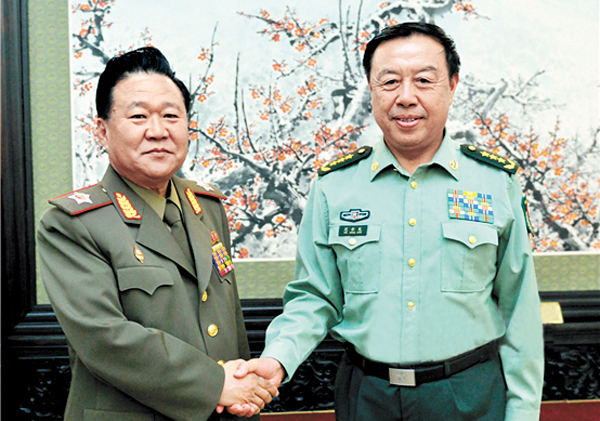 Choe Ryong-hae, special envoy for North Korean leader Kim Jong-un, left, is greeted by Fan, during his visit to Beijing on May 24. Korea and Ministry of National Defense of China

China arranged a closed-door meeting between Jung and Fan in advance, on the second day of his visit. They also treated Jung with maotai, which the Chinese claim is one of the world’s best-known types of alcohol, at a welcoming supper.

The Chinese officials allowed Jung to arrive in Beijing by South Korea’s C-130 military transport plane for the first time in relations between the two countries. They also offered a Chinese aircraft for Jung to visit a Chinese naval fleet.

A series of South Korean and Chinese army officials have also developed bilateral relations since 2005, when South Korea’s command of the 3rd field army signed a partnership with the command of the Jinan Military Region.

“When Defense Minister Kim Kwan-jin was the commander of the 3rd field army in 2005, he signed the partnership with the Jinan Military Region,” Baek Kun-ki, a Democratic Party lawmaker of South Korea, said. “Even after he stepped down from the position of commander he has maintained his relations with the region by visiting there.”

The officials enjoyed visiting a public sauna with the Southern soldiers when they were here.

“In fact, senior Chinese military officials were mostly reluctant to visit the sauna together, but they became much closer with South Korean soldiers after the bath,” according to the South Korean source.