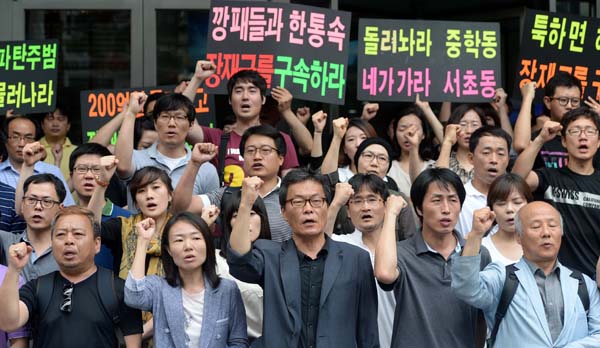 Reporters from the Hankook Ilbo stage a protest rally yesterday in front of the newspaper company office to demand that the owner of the paper step down. [NEWSIS]

A conflict between a labor union and the Hankook Ilbo, one of the country’s major newspapers, led to a shutdown of the office as well as the company’s news production system.

On April 29, the labor union reported Chang Jae-ku, chairman of Hankook, to the Seoul Central Prosecutors’ Office on charges of breach of trust, saying he had caused the company losses amounting to 20 billion won ($17.7 million).

The labor union said this option would save the company 20 billion won, as it guarantees the company could buy the building’s 2,000 pyeong for 7 million won per pyeong.

But instead, Chang gave up the first option to buy, so that he could borrow a large amount of money from Hanil for personal purposes.

The market value for one pyeong in a similar office space is 17 million won, and that is what Hankook ended up paying for the space.

“Chang promised to resign from the post after he recovers the 20 billion won to the company by selling his personal assets when the labor union first brought out the issue,” the labor union said.

Instead of keeping the promise, the chairman appeared in the newsroom on Saturday afternoon, on the 15th floor of the company building, with about 20 men, including some executive-level employees, and kicked out two employees who were on weekend duty, and locked the entrance door.

Immediately after the lockdown, the company sent an e-mail that included a commitment letter to all its reporters and employees.

The letter read: “I pledge that I will work under the control of the chief editor and the head of each department that the company has appointed. I will follow the company’s demands, including termination of employment, if I violate such commitment.”

All employees were required to sign the letter in order to have access to the company intranet and retain their employment.

Minutes after the e-mail was sent, the company intranet, where reporters write and submit their stories and share information related to their work, was disabled as well.

When a reporter from the Hankook Ilbo who hadn’t yet signed the commitment letter logged in, a message popped up that read, “the person holding this I.D. is no longer an employee of the Hankook Ilbo.”

Around 9:30 a.m. on Sunday, labor union members and about 130 of Hankook’s reporters gathered in front of the company building and demanded Chang open the newsroom.

At 11:30 a.m., they tried to unlock the entrance of the 15th floor with a pair of locksmiths but failed. All access, including to stairwells and elevators, had been blocked.

Later in the afternoon, Chang appointed Ha Jong-oh, an editorial writer, as the acting chief editor.

The reporters voted on the bill to appoint him as chief editor on June 8 and unanimously rejected the appointment.

Yesterday’s edition was produced under the control of Ha with seven managerial-level reporters and five staff reporters.

“Most of the stories were copied and pasted from stories released by wire agencies,” a spokesman of the labor union told reporters. “The chairman shut down the newsroom in order to cover up his own irregularities.”

The Hankook Ilbo typically publishes a 32- or 36-page newspaper for the Monday edition but it was shortened to 24 pages.