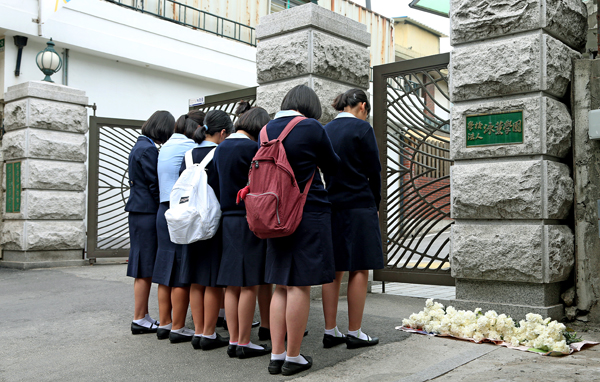 Students at Younghoon International Middle School pay respects to the vice principal who fatally hanged himself Sunday evening after questioning by prosecutors into alleged irregularities in admissions. By Kim Hyung-soo

The vice principal of Younghoon International Middle School, which recently made headlines for irregular admissions procedures that favored the rich, hanged himself Sunday from the railing of a school staircase.

The vice principal, identified by the surname Kim, was one of 11 school officials reported by the Seoul Metropolitan Office of Education to the prosecution last month over giving preferential admission to certain admission candidates.

They were suspected of asking for money from the candidates’ parents and then altering test scores to ensure their admissions.

Vice Principal Kim had been summoned by prosecutors for questioning twice this month.

In a two-page, handwritten suicide note found in Kim’s office, the 54-year-old reportedly wrote that he did what he “thought was in the interest of the school” but had changed his mind and concluded that his actions had been “wrong.”

“Those who are responsible [for the scandal] should be held accountable,” he reportedly wrote.

Shocked by the suicide, the school announced yesterday a two-day class suspension.

Kim’s suicide brought more attention to a school that was already reeling from reports that the son of Samsung Group’s vice president Lee Jae-yong was allegedly one of the admissions applicants who had received special treatment.

It was reported that Lee’s son had been given perfect scores on subjective admission evaluation areas such as a personal statement to make up for poor scores in objective areas. It was also reported that he was accepted under a category for disadvantaged students this year because he was from a family with divorced parents.

Lee issued a public apology and pulled his son out of the school. He is reportedly preparing to attend a school in Shanghai.

All six students somehow earned full marks in subjective areas of evaluation such as personal essays.

Despite the suicide Sunday, prosecutors said they will continue the investigation to get to the bottom of corrupt admissions practices at international schools.