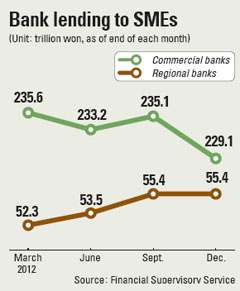 As the government beefs up its efforts to expedite the privatization of Woori Financial Group, controversy is rising over how it should dispose of two regional banks affiliated with the country’s largest financial holding company.

Since Shin made his remarks, the future of the two regional banks has become a hot potato issue. On Monday, the Korean Financial Industry Union put together an open forum at the National Assembly members’ office building in Yeouido, western Seoul, inviting scholars and politicians to discuss the reasons why Kyongnam Bank and Kwangju Bank should not be merged with another financial group or purchased by foreign capital.

At the forum, Jung Sung-chang, a business management professor at Chonnam National University, said regional banks contribute much in boosting regional economies and that if other commercial banks or foreign capital buys Kyongnam Bank and Kwangju Bank, there could be unwanted side effects.

According to Jung, over the past five years, commercial bank lending to small and midsize firms in the South Gyeongsang region grew by 873.9 billion won ($772.6 million), while regional banks’ lending to SMEs over the same period jumped 5.3 trillion won. Regional banks include Kyongnam Bank, Daegu Bank and Busan Bank, while commercial banks include KB Kookmin Bank, Woori Bank, Hana Bank and Shinhan Bank.

“We should fully respect the government’s three principles for privatizing Woori Financial, but what is of foremost importance is to make sure the privatization contributes to the development of the local financial industry, in other words, the regional financial industry,” he said.

The other two government principles are recouping the maximum amount of state funds used to buy Woori Financial shares and privatizing the financial group quickly.

The industry union, meanwhile, is concerned that if regional banks are sold to other commercial banks it will eventually end up benefitting other big financial institutions. It also worries that if Kyongnam Bank and Kwangju Bank are merged into other financial institutions, many of their workers will be laid off.

In the course of the Asian financial crisis in late 1990s, many regional banks were merged into large commercial banks.

Despite industry concerns, a government official said selling Woori Financial Group affiliates will be based on price.

“Bidders that bid the highest price will get what they want,” the official said.