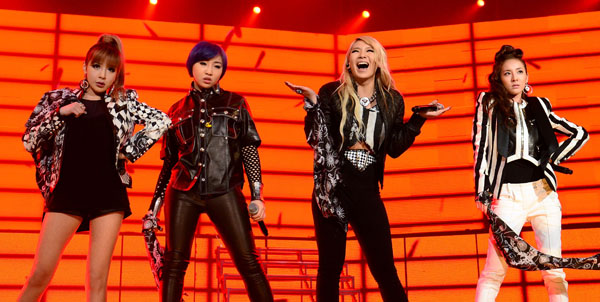 “Though the girls have remained committed to continuously releasing new work, the group was only able to release the song ‘I Love You’ last year due to other commitments, including a world tour,” Yang said yesterday. “So the group plans on meeting with local fans throughout the end of the year as we decided that it would be better to release a song with a music video every month from the collection the group has worked on in the past two years instead of releasing them in one album.”

After releasing three songs by September, the group will release either a new EP or a second regular album in October. This means that fans are guaranteed at least four new songs this year.

The girls will also try to include reggae in their songs for the first time. The first to be released, “Falling in Love,” is expected to be a refreshing change for fans.

“Although the piece certainly has elements of a new genre, it still includes the character of 2NE1 that has grown popular over the years,” Yang explained. “It should be popular among hardcore fans and the general public as we developed it with new choreographers overseas.”

Yang will make an additional announcement with more details about the girl group’s plans today. The message was posted on the agency’s blog under the title “From YG.” Yang has not made such posts on the blog since 2010, but he will begin using the blog again to communicate with local music fans.