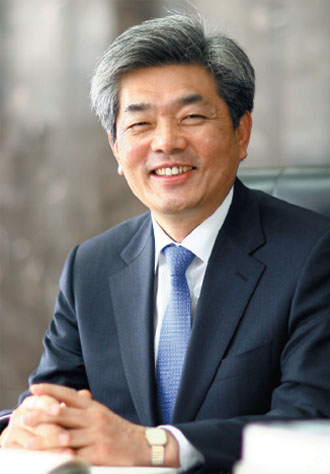 In a highly centralized country where big companies and advanced institutions are clustered in Seoul, colleges in other regions are often shunned by students and their parents. But Incheon National University says it has something unique to offer.

With the Songdo International Business District project in full swing, multinational pharmaceutical companies, international organizations and leading local companies like Samsung as well as campuses of prominent foreign universities have become a presence in the planned district in Incheon.

Choi Sung-eul, president of the university, believes the big budget government-supported project will provide a boost to his institution.

The Korea JoongAng Daily sat down with Choi to discuss how the college can take full advantage of the Songdo project and how it will position itself going forward.

Q. What distinguishes Incheon National University from other schools?

A. What makes Incheon National University unique is its geographical proximity to Songdo International Business District, which enables us to devise projects in cooperation with the planned city reclaimed from the sea. The university is the only national college near Songdo.

With the changed status, Incheon National University will align the school development strategy with the city’s future plans. We’ll also focus on fostering “global talent” rather than producing outstanding individuals who fit only in our region.

What do you think is the most significant achievement you have made during your years as president of the university?

I tried to change the overall professional setting. When Incheon University was a city university, the sense of complacency was prevalent. It was largely a bureaucratic organization where procedures were very organized with a high degree of formality in the way it operated.

Formal structures and rules exist that limit individual and personal decisions, and policies would allow for little deviation from the norm.

So personnel and faculty members tended to be passive and wouldn’t take the initiative if there was no pressure from higher levels.

As soon as I took charge, I gave the faculty as much autonomy as possible and encouraged members to speak out about anything if something goes wrong.

The past style was more top-down, but we are now embracing a bottom-up style of decision-making. I also linked pay increases to goals and achievements. Under the merit pay system, employees have become more proactive and motivated. I think that increasing competitiveness is not a matter of choice, but mandatory in these highly competitive times.

What are your major goals for the rest of your term?

I will lay the groundwork for Incheon National University to be included among the five major regional national universities by 2020. Incheon is the third-largest city in Korea, but has been somewhat pushed aside in government support programs because the government tends to take care of smaller regional cities.

This is one reason why Incheon University has had trouble building a stronger presence. But now we have become a national university and Songdo International Business District attracts numerous companies, state-run institutions and international organizations. Considering all of this, I am optimistic that Incheon National University will be one of the top five national universities.

Another goal is to make the college more globalized. Songdo was selected as a host city of the Green Climate Fund last year, beating other well-known cities. This is evidence that the city successfully transformed itself into a genuine international city. Yeonsu District, where INU is located, has also been selected to lead the international education business project. The university’s proximity to Incheon International Airport makes it the ideal place for a globalized higher learning institution.

Last but not least, I’d like to contribute to the development of a regional community through the operation of the university. Since INU was founded in 1979, the college has received a lot of support from the community. Without that support, we could not be where we are today.

Although we tried to play our part in improving the region, I think the effort has been far from enough.

I will expand volunteer programs where college students provide tutoring for elementary and middle school students. INU also established a social welfare center so it can participate in various volunteer programs in the regional community.

You mentioned that INU aims to stand out in both the global sphere and local community. How do you achieve both goals?

One might say the two goals sound contradictory. Actually, they go hand in hand. I am quite sure Songdo will host other international bodies. The government estimates the economic impact from it will be tens of billions of won. So the development of the regional community is linked with globalization.

The university now looks to hire more foreign professors and allocate more hours to basic English courses. The purpose of both plans is to better prepare students to perform in both international and regional settings.

INU was owned by Incheon City, but now it is a national university from this year and you are the first president since the status has changed. How is the transformation going to help students?

Many students say they can feel the elevated reputation of the university. Incheon is not just another city; it plays a role in supporting Seoul. And Incheon University is an institution that represents this important city. This will benefit the graduates of the university when they look for jobs.

In order for a college to get ahead, strong performance from alumni is vital. We’ve done well in this regard, but the change will foster a more vibrant alumni network and result in an enhanced reputation.