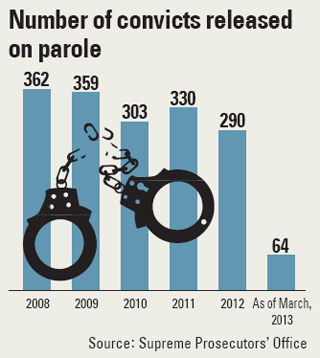 After being embarrassed by revelations of a parole given to a wealthy woman convicted of hiring a hit-man to kill a young woman, the prosecutor general yesterday vowed to improve the provisional release system.

The local media reported recently that a 68-year-old woman surnamed Yun, who was convicted of hiring a contract killer to murder a university student whom she suspected of having an affair with her son-in-law, swapped her prison cell for a luxurious hospital ward by submitting fake medical reports.

The Supreme Court sentenced Yun to life in 2004, but she spent more than four years outside prison by submitting 12 reports from her doctor saying she suffered from breast cancer, Parkinson’s disease, diabetes and depression. She was released three times on medical parole and the paroles were extended seven times.

Prosecutor General Chae Dong-wook ordered prosecutors yesterday to do their best to improve the integrity of the parole system.

“Although prosecutors succeed in laying bare the truth and winning stern punishment from courts, their efforts will be in vain if the integrity of the execution of the sentences is tainted,” Chae said. “The recent case showed that the prosecution failed to do its work.”

Yun, however, is only one in a long list of convicted criminals who managed to stay outside their cells by manipulating Korea’s parole system.

According to the Supreme Prosecutors’ Office, about 300 convicts on average are released on parole every year. Last year, 290 were released, and for the first quarter of this year, 64 inmates were released. The prosecution said more than 90 percent of the paroles are for medical reasons.

Under the law, humanitarian paroles can be given to prisoners for various reasons including medical, and prosecutors have the right to grant the provisional releases. When a prisoner’s health is impaired as a result of the imprisonment or if there is a concern that the inmate’s life is in danger, medical releases are granted.

Inmates who are more than six months pregnant, older than 70 or have other valid reasons can be eligible for compassionate releases.

Chun Kyung-hwan, younger brother of former strongman President Chun Doo Hwan, is supposed to be in prison for fraud, but he is staying in a hospital on a medical parole. The Supreme Court ordered him to serve five years in prison in May 2010, but he was released on parole for having a stroke two months later. He went back to prison in 2011 for 10 months but was released again later that year. He hasn’t been back to prison since and his parole was extended seven times.

Analysts said the parole review board hasn’t held a meeting on his case since last year.

“We’ve met with his doctor and respected other procedures by reviewing medical reports,” Kim U-hyeon, senior prosecutor with the Seongnam Branch Office of the Suwon District Prosecutors Office said yesterday. “When the medical conditions are serious, we can use our discretion to skip the review board.”

Concerns are also rising that special pardons are given to some parolees, allowing them to never go back to their cells. Powerful government officials, politicians and businessmen are beneficiaries.

Former spy agency chief Kwon Young-hae, convicted of interfering in the 1997 presidential election and embezzling from the Agency for National Security Planning, the predecessor of the National Intelligence Service, was released on medical parole in 2008. Later that year, he was granted a special pardon.

In 2006, the Supreme Court convicted Representative Park Jie-won of receiving 15 billion won ($13.3 million) from Hyundai Group and ordered him to serve three years in prison. He was released on medical parole in November 2006 and never went back to prison. In February 2007, he was granted a special pardon.

Suh Chung-won, advisor of the Saenuri Party, was convicted of selling legislative election nominations. In 2009, he was released on parole and received a special pardon last January.