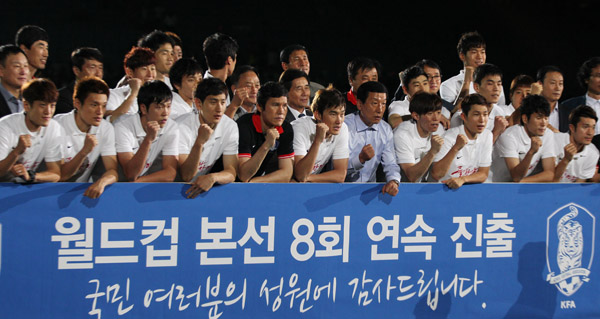 Korea’s outgoing national football coach, Choi Kang-hee, fifth from right in the front row, and his players pump their fists, but with glum faces, to celebrate Korea’s winning an eighth consecutive World Cup berth after a 1-0 loss to Iran during their final qualifying match for the Brazil World Cup at Munsu Stadium in Ulsan, Tuesday night. By Kim Min-kyu

Choi Kang-hee’s wish of “all’s well that ends well” was only half-fulfilled as Korea stumbled to a berth to Brazil World Cup with a 1-0 loss to Iran in their final qualifying match in Ulsan on Tuesday night.

Reza Ghoochannejhad capitalized on an error by defender Kim Young-gwon to score the winner in the 60th minute at Munsu Football Stadium, handing the hosts a second loss after a 1-0 defeat in Tehran in October.

With the victory, Iran qualified for its fourth World Cup as the winner of Group A with 16 points. Uzbekistan sprang back to tie with Korea with 14 points after a 5-1 thrashing against Qatar in the other match of the day, but finished third by a single-goal differential with Korea.

Uzbekistan will try to revive its hopes for a first-ever World Cup entry as it enters two rounds of playoffs, starting with one with Jordan in September. Jordan finished third in Group B despite a 1-0 victory over Oman on Tuesday as Australia joined Japan in taking a direct berth with a 1-0 win over Iraq. The winners of the Asian playoff will enter another playoff with a Latin American team in November. 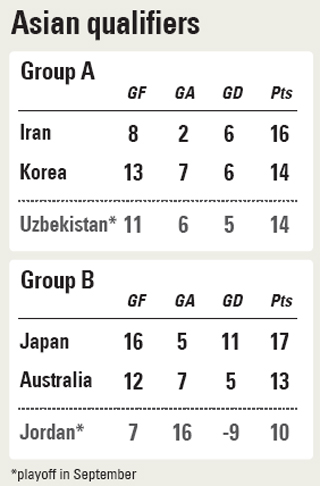 Korea will make a World Cup appearance for the eighth straight time, a feat that only five other countries have achieved, including Brazil (20 times), Germany (15 times), Italy (13 times), Argentina (10 times) and Spain (nine times), but its significance was offset by Korea’s failure to overcome its chronic problems including predictable attacking tactics, weakness to counterattacks and no cohesion among the players. Iran coach Carlos Queiroz said that his team saw Korea’s weakness and exploited it.

The Korean Football Association held a ceremony after the Iran match to celebrate its eighth straight World Cup berth, but many of the 42,243 fans at the sold-out Munsu Stadium left immediately in an expression of dissatisfaction with the home team’s play.

“We qualified but didn’t finish with a satisfactory result,” said coach Choi, who will return to the Jeonbuk Motors, as he pledged he would do after the qualifying campaign. “Today was a disappointing defeat but the players gave their best and I wish them luck in Brazil.”

Choi, who took over for Cho Kwang-rae, who was sacked after a 2-1 loss to Lebanon in November 2011, experimented with new team formations in search of effective attack lines in many of his 13 matches.

The experiment, which produced six victories, five losses and two draws, was largely considered a failure and is assessed to have hurt teamwork, one of Korea’s strongest weapons, with the overseas and domestic players often finding each other on the wrong foot.

“Over the past one and a half years, there was not a single day when I felt comfortable,” the 54-year-old coach said. “Tonight’s match is especially regretful and that, I think, will remain forever in my memory.”

Korea was a more dominant side against Iran until the tables were turned in the 60th, when Kim failed to clear a speculative ball forward down Iran’s right wing. Ghoochannejad stole the ball, sprinted clear and sent a curling left-foot shot beyond goalkeeper Jung Sung-ryong.

Korea, not wanting to put its fate in the hands of the game in Uzbekistan, pressed forward for the rest of the game but failed to find an equalizer.

Kim almost made up for his mistake, but his close-range shot in the 86th minute produced a reflex save from keeper Rahman Ahmadi and Jang Hyun-soo’s follow-up effort was also blocked.

Uzbekistan scored five goals in the second half in a finish that threatened to tip Korea out of the second spot.

“It is very unfortunate for us as we wanted to qualify for World Cup and celebrate with our fans. It is a shame that we could not achieve our aim,” Uzbekistan coach Mirdjalal Kasimov said.

“We couldn’t score in the first half as the Qatar goalkeeper played very well,” he said. “We made changes in the second half and that’s why we scored five goals, but Iran beat Korea. We will continue to battle in the next round, although we need a little time to recover.”