A play can’t do Murakami justice

A play can’t do Murakami justice 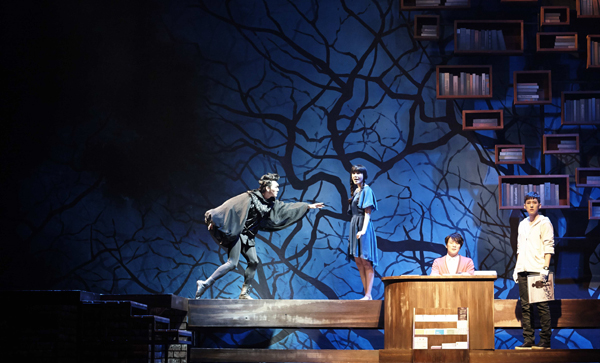 A scene from the play “Kafka on the Shore,” which had its first run in Korea this year. Provided by PAC Korea

Avid readers around the world have no doubt read Haruki Murakami’s books again and again. That’s the way it’s always been; Murakami is for reading. The crazy world of Murakami has always been in the mind, never out in the open. Murakami’s narrative is at its best in the mind’s eye. Though there have been a few adaptations into films and plays, most of his work has remained on paper only, setting the author apart from his contemporaries.

So who is Haruki Murakami? He is a man who has eloquently expressed the alienation and loneliness felt by his peers since the 1980s. He is one of the world’s most-read authors and every year makes it onto the short list for the Nobel Prize in Literature. After he had the world of literature in a flurry with the hit “1Q84” in 2010, he followed up with another hit “Colorless Tsukuru Tazaki and His Years of Pilgrimage.” The sale target for the first edition of the book is 600,000 copies.

Murakami is an esteemed writer, loved by all, and this beckons the question: why don’t his works make the transition to visual art? The answer probably lies in the fact that Murakami’s strength is his ability to make words themselves read like music, not to mention his elaborate portrayal of the human psyche.

His work weaves in and out of reality and fantasy, and his trademark magical realism is not easily adaptable to the stage or a movie screen.

But fans in Korea were able to enjoy a visual manifestation of “Kafka on the Shore,” which ran from May to this month at the Dongsoong Art Center.

Brought to life by the Tony Award-winning writer and director Frank Galati in 2008, director Yukio Ninagawa reimported the musical to Japan last year. With Cannes Film Festival award-winning actor Yuya Yagira as the lead, the show entertained the home audience for 3 hours and 45 minutes. It was one of the most talked about theater events of 2012. But just how did these big names of theater fare in bringing Murakami to life onstage?

To be fair, reading Murakami is already as if you’re watching a great spectacle onstage. As each page turns, you slip further away from reality and readers find themselves placed in foreign surroundings whilst being able to catch a glimpse of their own soul. It is like being transported to another dimension where you are able to reflect on life and unearth hidden meanings behind existence. Transferring that into the seen world and bringing to life a world of unlimited imagination is no doubt a difficult job. Producers have to stretch their minds like never before to equal the chaos contained within the pages. But unfortunately, the stage was no match for the performance that takes place in the mind.

The novel in question, published in 2002, was acclaimed for compiling some 23-odd years of Murakami’s literary life - an accumulation of his life work. The plot about a boy suffering from the Oedipus complex, toying with the boundaries of real and the surreal, took the reader in and out of dreams and reality. By the way of various symbolic characters, it explored notions of life on a scale like no other. The two worlds run parallel while somehow hinting at a connection often described as an “epic drama,” but the unconventional structure and multitude of fascinating characters like Johnnie Walker are already enough commotion for the humble reader. 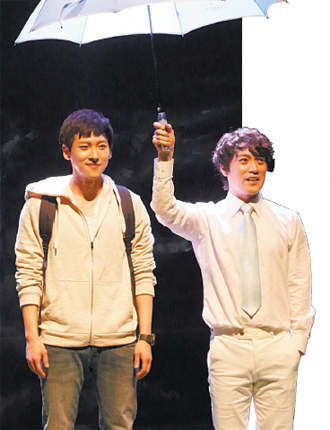 As Kim Mi-hye, the translator behind the book’s Korean version and professor at Hanyang University said, much was lost in the American interpretation that treated life and death as the same while doing away with the key Asian viewpoints. It was hard to find the mystery and fantasy elements prevalent in the original work in the theater adaptation, which played out like a theory being read.

In the original text, Murakami’s picture of the Oedipus complex is conveyed through a 15-year-old runaway who flees his father and a curse in search of his mother and sister. Simultaneously, a tale is told about an old man with the intellect of a 9-year-old who can talk to cats and has only half a shadow.

The relationship between the two protagonists living in parallel worlds revolves around the fact that the two can never meet. Through the juxtaposition, life, death, reality and dreams are examined in a maze that comes close to unlocking the two worlds by subtly hinting at an intersection. At least that’s how it is done on paper. But onstage, it amounts to nothing more than a simple parallel universe. For viewers who didn’t read the novel, the scenes amount to nothing more than a series of unrelated events rather than arousing interest in the complex relationship of the plot. Sadly, Murakami’s characteristic tone was lost in the condensed portrayal.

After all, even reading the original novel is often a confusing task, so to understand it in theater form is no easy feat.

But the allure of Murakami is the fact that you are able to catch a glimpse of the spiritual, a glimpse of the opening of your soul as you wander round and round along the maze that is Murakami’s world. Facing Murakami in theater seems a futile task. Maybe it’s because there is something overwhelming about navigating the web alone and attempting to really get to the heart of the matter. When interpreted by someone else, Murakami’s world doesn’t offer the same thrill as roughing it alone.

Perhaps Murakami would be best tackled alone. At best, to watch Murakami on the stage is watching someone else reinterpret, in a very boring manner, a world that you’ve already encountered much more vividly in your own mind.