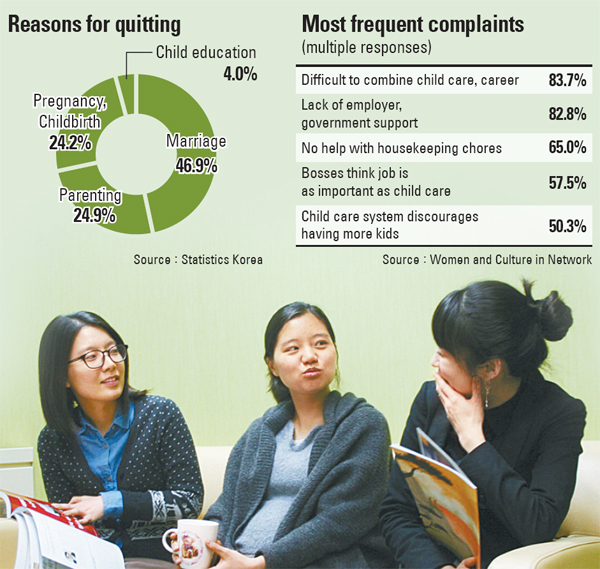 Increasing the number of regular part-time jobs is a key part of the government’s road map to the 70 percent rate of employment announced June 4, and there have been several initiatives targeting the likeliest beneficiaries of that strategy: women of childbearing age.

While there has been some pushback from organized labor, SK Telecom has taken the lead, establishing a part-time regular system at its customer care center subsidiaries Service Ace and Service Top, where 90 percent of employees are women.

SK’s regular part-time employees are telephone counselors who work from 11:30 a.m. to 3:30 p.m. They receive four basic insurance plans and opportunities for advancement.

SK Telecom hired a total of 180 part-time regular employees, giving preference to those who had left the workforce due to marriage, childbirth or parenting responsibilities.

Working mother Lee Eun-joo, 33, who has a 30-month-old daughter, works at SK Telecom Gwangju’s Seobu Customer Service in Gwangju, South Jeolla. Until last month, she left her daughter at her parents’ house in Suncheon, South Jeolla, while working.

Although she worked from 9 a.m. to 6:30 p.m., with no night shifts, she could not leave her child at nearby day care centers, which close by 4 p.m.

She receives 60 percent of her previous salary and similarly reduced incentives and benefits.

“Considering the cost and the stress I had to bear when I stayed away from my child, the halved salary is much more satisfactory. I plan to stick to this system for one or two more years,” says Lee.

Currently, full-time SK employees are allowed to switch to a part-time regular status as well as return to full-time later, and working as a part-time employee is also recognized as career experience.

“We increased the number of part-time workers committed to working between 11:30 a.m. and 2 p.m., the busiest hours when the phone calls come flooding in and the stress levels of employees are rising the most,” said Kim Kyung-won, manager of the SK Telecom Guro Service Center in Guro district, southwestern Seoul. “As workloads are distributed through such job sharing, our employees can take breaks in turns and they are satisfied with the new system so far.”

While there are higher labor costs, the company believes they will be outweighed by the long-term gain.

“It requires such a long time to foster a veteran employee, who can professionally deal with customers’ complaints, it is our loss when such an employee leaves due to child-care issues,” said Bang Sung-jae, head of SK Telecom’s customer-oriented management team.

According to Statistics Korea, the reasons for giving up their careers were cited as marriage (46.9 percent), child care (24.9 percent), pregnancy and childbirth (24.2 percent) and children’s education (4 percent).

Other companies are following in SK Telecom’s footsteps

KT, where 10 percent of senior executives are women, is flexible on work hours and allows telecommuting.

Amore Pacific, a cosmetics company with a workforce that is 63 percent female, has implemented “ABC working time,” a system of flexible working hours that is available to all employees.

Homeplus, the nation’s second -largest discount store chain, has a system that allows employees with children age six or younger to work 15 to 30 hours per week while retaining regular employee status.

Since February, E-Mart has let pregnant employees work an hour less each day.