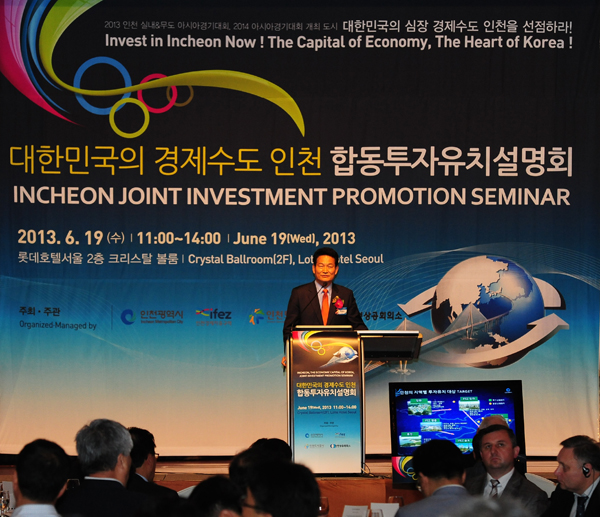 Incheon mayor Song Young-gil gives a speech on the city’s commitment to attracting corporate trade and investment during a joint event held at the Lotte Hotel in central Seoul yesterday. Provided by Incheon city government


The local government of Incheon City has made extensive efforts to attract leading companies from both home and abroad.

The Incheon Metropolitan Government, along with the Incheon Free Economic Zone Authority, Incheon Development & Tourism Corporation and Incheon Chamber of Commerce & Industry hosted a seminar on trade and investment-themed “Tap the economic capital of Incheon in advance.”

The event was led by Incheon Mayor Song Young-gil, who asserted the city’s strong commitment to attracting corporate trade and investment.

“A new EIU [Economist Intelligence Unit] report revealed that Incheon will be the second major city to see the greatest surge in global competitiveness by 2025. The city’s foreign direct investment reached $1.469 billion, the nation’s top figure in the first quarter of 2013,” Song said.

“The investment, groundbreaking and relocation of major companies around the world are continuing.”

The mayor said he will also address Incheon’s investor-friendly environment, including the city’s support for incoming companies.

The local government and the Incheon Chamber of Commerce & Industry will provide financial support, such as subsidies for relocation, employment, training, rent and facilities to companies that move their headquarters from Seoul to Incheon.

When a company hires more than 20 Incheon citizens, the government plans to support 200 million won of job training subsidies.

Incheon has attracted foreign investment worth $5.4 billion since Song’s inauguration to the office in June 2010, the top figure across the nation in terms of greenfield investment.

The city expects it will create an additional 50,000 jobs and boost the local economy through trade and investment and local and foreign marketing activities.

At the event, the Incheon government signed 300 billion won of memorandums of understanding for projects such as establishing the International Ginseng Retail Center, relocating Daehan Feed headquarters and building the Hallyu Culture Complex.