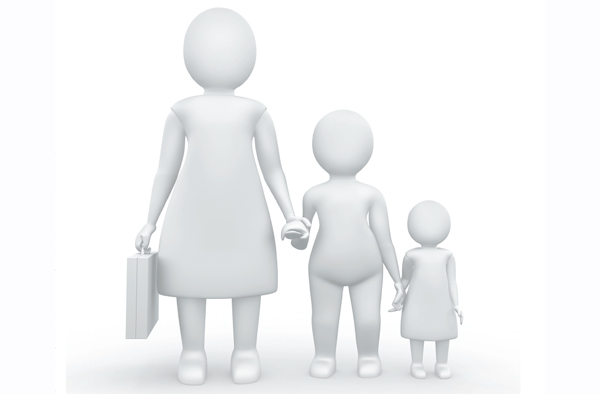 Seo Jeong-eun, who has a 3-year-old son and a newborn daughter, is afraid of returning to work after a six-month maternity leave because she might be passed over for promotion to assistant manager - again.

“When I returned last year after a seven-month break for having my first child, the company hired another person and she got promoted instead of me,” Seo said.

The 32-year-old working mother is currently on a six-month, half-pay leave after the birth of her daughter. She is employed by a pharmaceutical company in Gyeonggi. In her fourth year at the company, she remains in an entry-level position.

“I lost not only the opportunity to get a promotion, but also my seat in the office,” Seo said. “When I reported to management that I was pregnant with my second baby, one of my seniors told me, ‘You are brave.’ I was really upset.”

Seo expects her situation to worsen if she returns to work in September and has to juggle work, child care and household chores.

“I don’t know how patient I would be if I get such bad treatment at work while looking after two children,” she said.

Earlier this month, the government came up with policy measures that could help ease the burden on Korea’s five million working mothers. Some measures received positive responses from women, though many say it will take time to see if they are effective.

As the Park Geun-hye administration tries to ramp up the country’s employment rate to 70 percent over the next five years, it has identified women’s participation in the workforce as a significant obstacle. The problem is particularly acute for women in their 30s, while at the same time more women in their 20s and 40s are working.

By comparison, about 69 percent of married women between 25 and 34 in the United States are economically active and 73 percent of those between 35 and 44.

Under current law, companies are required to give women one maternity leave of three months to a year for each child. Employees can use the leave anytime until the child is 6 years old, and they must receive at least 40 percent of their regular monthly salary.

The government proposes giving employees the option of dividing the leave into thirds and taking it at any time until the child is 9 years old.

While employees currently must apply for maternity leave, the government wants to make it automatic. Employees would still be able to cancel or postpone the leave.

In order to support the replacement of employees on maternity leave, the government will provide companies 200,000 won ($177) for each temporary worker hired. The amount can be reviewed and raised.

The government also hopes to add 70 percent more day care centers at workplaces by 2017 by providing a variety of incentives to companies.

The government said it will offer up to 300 million won in subsidies for construction of day care centers, an increase of 100 million won from the current aid program.

According to government data, only 359 of 919 companies required to provide day care, or 39.1 percent, run their own centers.

Response to the latest efforts by the government to improve conditions for working mothers have been mixed. Some say the government has made the easiest and most realistic attempt, while others say the measures are not enough to address fundamental problems.

“Making another rule is useless,” said Lee Su-youn, director of the Korea Workingmom Institute. “The point is that the existing rule on maternity leave is sufficient, but the problem is many companies are not following the rule.”

Lee also pointed out that if there are more in-house day care centers, it will be better for sure, but not many of the women who need them work at smaller companies that can’t afford to run one.

Choi Hee-sun, mother of a four-year-old girl, said external expansion of infrastructure does help, but it won’t result in real change inside the workplace.

“Better in-house day care centers would make me a little more assured about my daughter’s well-being while I’m at work, but discrimination against working moms wouldn’t change much,” she said.

The 33-year-old works at one of major conglomerates and sends her daughter to a day care center on the second floor of her office building. Choi picks up her child after work about 6 p.m. When she works overtime, which she does until 9 p.m. or 10 p.m. at least twice a week, Choi’s mother comes to take her granddaughter.

“When I came back to work, my desk and chair had been moved to a corner of the office, with our team leader saying that he decided to do so to give me more personal space because ‘I am a mother,’?” Choi said. “Major projects that I used to get have been passed on to one of my single female colleagues.”

In a survey of 1,300 working mothers by the Samsung Economic Research Institute, about 54 percent said internal rules and negative attitudes are the most difficult problems. About 29 percent said their seniors and colleagues are stressors, while 27 percent said their children add to the stress.

“Most local companies have corporate cultures that are incompatible with being a full-time housewife,” said Ye Ji-eun, a research fellow at the institute. “There is prejudice about working mothers and most protections for them are superficial.”

Although there are more working mothers in the United States, it seems their situation is not much different than their peers in Korea.

The Web site of the Working Mother Network, a division of Bonnier Corporation, posts polls that indicate just how stressful work can be for American women with children. In one poll, more than 50 percent of 300 working mothers surveyed said their bosses wouldn’t be open to them working a flexible schedule.

Sheryl Sandberg, chief operating officer of Facebook, said in her book “Lean In: Women, Work and the Will to Lead” that U.S. women are forced to pay a big penalty for combining career and family responsibilities.