Remote airport one of world’s most dangerous

Remote airport one of world’s most dangerous 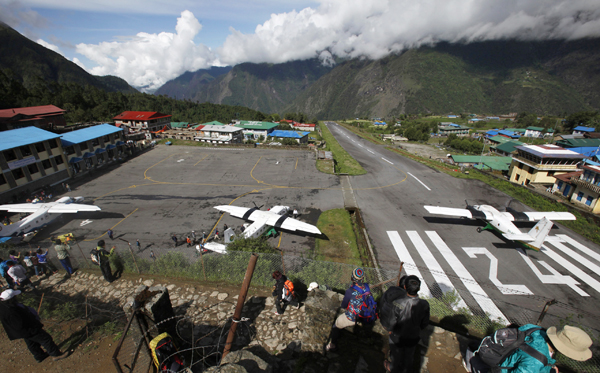 Several flights prepare to take off after bad weather disrupted flight services at Lukla airport, Nepal. At an altitude of 2,843 meters (9,325 feet) it is regarded as one of the world’s most extreme and dangerous airports.[AP/NEWSIS]

LUKLA, Nepal - As soon as the decades-old Twin Otter landed at Lukla airport, passengers burst out in applause. They do that for nearly every safe landing at the often terrifying airport at the gateway to Mount Everest.

At an altitude of 2,843 meters (9,325 feet), the small airstrip here has earned a reputation as one of the most extreme and dangerous airports in the world. The single runway is narrow, short and sloped. Miss the runway by a few meters and the plane would hit a mountain.

“After you cross the river there is no turning back, you have to land,” said Pramod Poudel, a Tara Air pilot who has flown hundreds of these flights to Lukla.

Carved out of the side of a mountain, the airport was built by Sir Edmund Hillary in 1965 - 12 years after he became the first man to conquer the world’s highest peak - to help the local yak herders known as Sherpas spur development in the poor area.

Now what once was a dirt strip is one of Nepal’s busiest airports, the Tenzing-Hillary Airport - named as well for Hillary’s climbing partner Tenzing Norgay.

The thousands of mountaineers and trekkers who visit the Everest region have to fly to the airport if they want to avoid a daylong bus trip from Katmandu and five days of trekking to reach here.

The airport has handled up to 79 flights on one day - far beyond the acceptable capacity for such a facility, said Rinji, the airport’s air traffic controller, who, like most Sherpas in the Everest region, uses only one name.

Crashes are not uncommon. In August 2010, 14 people were killed when a Dronier belonging to the domestic Agni Air crashed after it was forced to turn around due to bad weather conditions at Lukla.

In May 2004, another Yeti Airlines Twin Otter crashed while approaching Lukla, killing all three occupants in an accident blamed on heavy cloud buildup and pilot error.

Once a tiny village, Lukla now has 3,000 people, many of them drawn to tourism work. Sherpas wait nearby hoping to be hired as porters by trekkers staying in the mountains for anywhere from a few days to a month.

But the burgeoning population attracted by the airport has also created severe drinking water shortages and sewage problems. And when a curtain of fog descends on the airport during the popular October trekking season, flights can be cancelled for days.

Even on its best days, the airport is open for only a few hours. A man named Funru said his father once owned the land where the airport sits and helped Hillary dig the airstrip.

“When I first began working at the airport, it used to be nothing like this. It was like a river bank. Every evening we had to collect rocks and fill the potholes so flights could land the next morning,” Funru said.