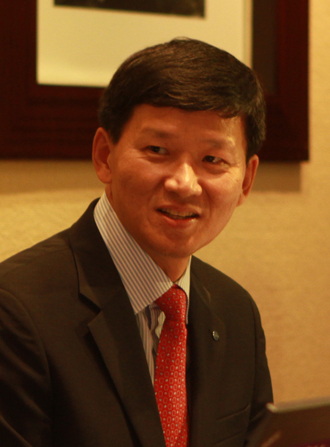 Korean Re CEO Won Jong-gyu said he will take the country’s largest reinsurance provider to the next level and transform it into a leading global reinsurer that generates half of its revenues from overseas by 2020.

The company, also known as Korean Insurance Company, currently gets about 80 percent of is revenues from Korea.

“Among local financial institutions engaged in securities, banking, and insurance, Korean Re is the only financial firm that makes 20 percent or more of its revenue outside Korea,” Won said?in a press conference at the Grand Hyatt Hotel where the 49th annual International Insurance Society Seminar wrapped up yesterday. “To focus on increasing revenue from overseas, a dedicated task force will be set up next year. The world’s two largest reinsurers, Munich Re and Swiss Re, which boast a 150-year history, were smaller than us 50 years ago. We, too, have a chance to rise to become the top insurer in the world.”

To make that happen, Won said he will reorganize the company by introducing innovative language training programs.

Currently, few Korean Re employees are fluent enough in other languages to underwrite contracts abroad, he said.

Won said the domestic reinsurance market has reached a saturation point, so there’s no other way to achieve significant growth other than aggressive expansion overseas.

“Korean manufacturers stopped building new factories in Korea and are setting up facilities abroad,” he said. “This means the potential for the reinsurance industry to grow in Korea is low and we should target the rest of the world.”

“Although Korean Re has been growing 10 percent every year, its capital adequacy ratio still lags behind?that of top 10 players,” said Won.

He rejected speculation that Korean Re aims to expand business portfolio by seeking M&As or establishing a financial holding company, saying it is not appropriate to make such decisions given conditions in the global financial market.

The IIS Seminar was Won’s first official appearance since he was appointed CEO?last week to replace Park Jong-won. Park held the post for 15 years, one of the longest ever for a financial institution CEO in Korea.

Won, the youngest son of Korean Re Chairman Won Hyuk-hee, joined Korea’s largest reinsurance provider in 1986 as a entry-level worker.

Unlike other chaebol scions who enjoy fast promotions to the executive level by starting in management positions, Won learned the business from the bottom up, according to market observers.