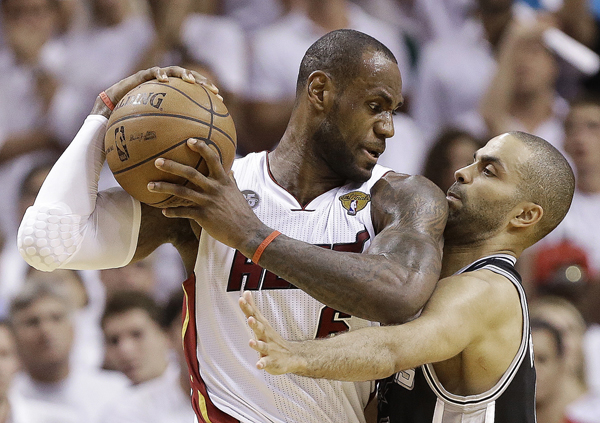 MIAMI - The Miami Heat beat the San Antonio Spurs, 103-100, in overtime on Tuesday to square the series at 3-3 and force the NBA Finals to a decisive Game 7.

Miami’s LeBron James shrugged off a poor start to get 32 points, 11 assists and 10 rebounds while Ray Allen hit a 3-pointer with 5.2 seconds to play to force overtime.

James scored 16 points in the fourth quarter to rally the Heat from a 10-point deficit. He drilled a 3 with 20 seconds to go and Allen hit another to tie it.

James’ layup with 1:43 to play in overtime gave the Heat a 101-100 lead, and Allen added two free throws to force Game 7, which is on Thursday night in Miami.

The Spurs had one final chance when they were down 103-100, but Chris Bosh blocked Danny Green’s 3-point attempt from the corner as time expired.

Tim Duncan scored 30 points for the Spurs, his most in an NBA Finals game since Game 1 in 2003, but was shut out after the third quarter. He added 17 rebounds.

Thursday’s decider will be the first Game 7 to be played in an NBA Finals since the Los Angeles Lakers beat the Boston Celtics in 2010.

The Spurs looked headed to a fifth title in five chances when they built a 13-point lead with under 4 minutes left in the third quarter, then again when they recovered from blowing that lead to take a five-point edge late in regulation.

Miami, which hasn’t lost consecutive games since Jan. 8 and 10, is trying to become the fourth team to win the final two games at home since the NBA went to the 2-3-2 format for the finals in 1985.

James came in averaging 31.5 points in elimination games, highest in NBA history, according to a stat provided by the Elias Sports Bureau.

He was well off that form early, sinking just 3 of 12 shots over the first three quarters. With the Heat trailing by 10, frustration was apparent among the players and panic was setting in among the fans.

However, he finished 11 of 26, even making a steal after his basket had given Miami a lead in overtime.

The Heat were in the same place as they were in 2011 at the end of their Big Three’s first season together, coming home from Dallas facing a 3-2 deficit in the finals and on that occasion they couldn’t rally.

This time they said they welcomed the challenge and the chance to show they how much mentally tougher they were than the team the Mavericks easily handled in Game 6 that year.

Kawhi Leonard had 22 points and 11 rebounds for the Spurs.