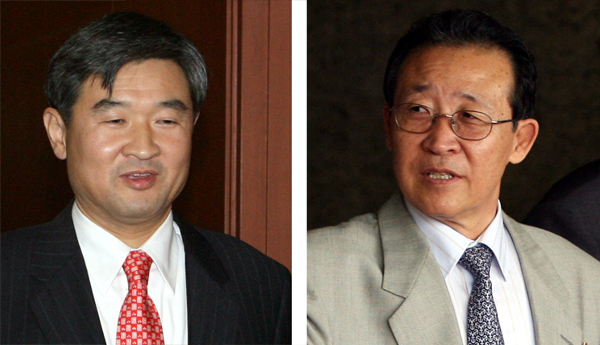 Surrounding the matter of North Korea’s nuclear affairs, South and North Korea have their own key negotiators who have been rivals for a decade.

His visit coincided with the trip of Kim Kye-gwan, North Korean veteran negotiator and vice minister, to Beijing yesterday to have strategic talks with his Chinese counterparts, including Wu Dawei, Chinese chief representative on North Korea policy, whom Cho is also to meet with on Friday.

Cho, 57, and Kim, 70, have had a long run of attending negotiating tables together in regard to North Korea’s nuclear weapons program. Both are the top envoy of their homeland in dealing with North Korean affairs.

In South Korean diplomacy, Cho has been evaluated as a cautious strategist in dealing with Pyongyang. In fact, his family history is related to North Korean affairs as well. In 1980, Cho married Lee Jin-yeong, a daughter of then-Foreign Minister Lee Beom-seok.

However, three years after the marriage, in 1983, Cho lost his father-in-law, Lee, who was killed by North Korea’s terrorist attack against then-South Korean President Chun Doo Hwan at Aung San National Cemetery in Burma.

It was February 2004 when Cho met with Kim for the first time. The situation on the Korean Peninsula was grave, with North Korea’s declaration of defecting from the Non-Proliferation Treaty of nuclear weapons in 2003. Cho attended the second six-party talks as a South Korean delegate, and it was Cho’s debut at a negotiating table with Pyongyang.

There, North Korea’s Kim appeared as chief delegate, as counterpart of Lee Soo-hyuck, then-assistant secretary for Seoul’s Foreign Ministry. Kim was already recognized as a veteran negotiator at the time, who had attended bilateral talks with Washington starting from the early 1990s. Kim had been chief negotiator for North Korea at the 12 four-party talks under the Bill Clinton administration as well.

Since the six-party talks in 2004, Cho and Kim had met with each other at several major talks, struggling with overnight negotiations together.

“Kim was always confident, and Cho was cautious and persistent,” a South Korean official who attended talks with Pyongyang along with Cho, said.

They also successfully made a major accomplishment in September 2005, issuing the Sept. 19 joint statement in which Pyongyang promised to return to the NPT and allow inspectors from the International Atomic Energy Agency to come to their country and monitor their nuclear facilities.

The diplomacy war between Cho and Kim ended in February 2006, when Cho was appointed head of the North Korea-U.S. bureau of the ministry, an organization in charge of indirect support for negotiations with Pyongyang. After that, Cho was named Korean Ambassador to Ireland in 2008 and to Australia in 2011.

In May, Cho eventually returned to North Korean issues when he was appointed the special representative for the Korean Peninsula peace and security affairs. The second war of diplomacy has begun between Cho and Kim.