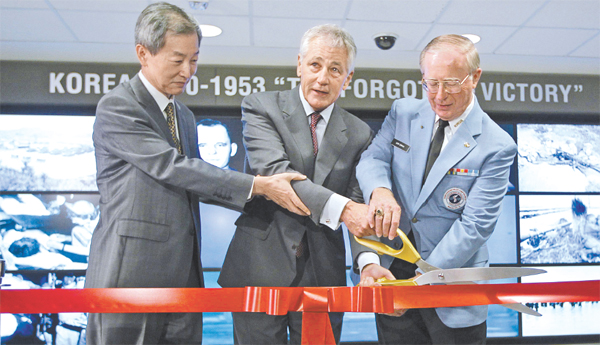 Secretary of Defense Chuck Hagel, center, Korean Ambassador to the United States Ahn Ho-young, left, and National Director of the Korean War Veterans Association Lewis Ewing cut a ribbon on Tuesday to dedicate a new installation in the Pentagon to commemorate the 1950-53 Korean War in Washington.[NEWSIS]

Often referred to as the “Forgotten War” - sandwiched between World War II and the Vietnam War and glossed over by many U.S. history textbooks - the Pentagon on Tuesday launched an exhibit to rebrand the Korean War as the “Forgotten Victory.”

U.S. Defense Secretary Chuck Hagel on Tuesday dedicated a new installation on the ground floor of the Pentagon to honor veterans of the 1950-53 Korean War, commemorating the 1953 armistice agreement that ended the war 60 years ago.

“We assure you that through this dedication today, your efforts and your noble cause will live on,” Hagel said in a speech, addressing Korean War veterans who attended the ceremony. “You have helped shape history in a unique and magnificent way.”

Hagel recalled Korean War veterans coming back home when he was a young boy in Nebraska and said there was scant acknowledgement of their service and that “very few people knew where Korea was.”

“Yet in the scope of things, 60 years later, the Republic of Korea plays a key role as a very key ally, maintaining peace, security, stability in that part of the world,” he said.

He said that just two weeks ago at the Shangri-La dialogue in Singapore, he spent a good deal of time with Korean Defense Minister Kim Kwan-jin, adding the “bilateral relationship between the United States and Korea, clearly defined for 60 years now, was much in evidence at the dialogue.”

“This special relationship is bigger than just the Korean Peninsula or the north Asia region - it has affected the world.”

“The Forgotten Victory” exhibition, which displays historical documents, pictures, videos, testimonies of veterans and artifacts such as weapons, uniforms and maps, debuts one month before the 60th anniversary of the signing of the armistice agreement on July 27, 1953.

It has become a part of the Pentagon tour that is seen by more than 250,000 people each year, according to the U.S. Department of Defense.