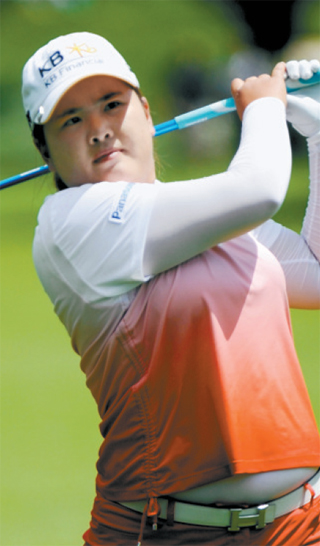 The world’s top female golfer, Park In-bee, is seeking to tie her childhood idol, Pak Se-ri, for the most single-season victories by a Korean when she enters the Walmart NW Arkansas Championship at the weekend.

Coming off her fourth victory of the season and seventh overall at Wegmans two weeks ago, Park will lead a field of 144 at the Pinnacle Country Club in Rogers, Arkansas, that kicks off a three-day tournament on Saturday, Korean time. She finished fourth at the event last year.

Park, 24, is among the so-called Se-ri kids, whose dreams of becoming golfing greats were inspired by the 35-year-old Hall of Famer. Pak, a Korean trailblazer on the LPGA Tour, won 25 LPGA titles, including five major championships.

In 2001, Pak set the Korean record for most wins in a season with five, and equalled that the next year.

Park has a good chance of breaking the Korean record as she has four wins in 13 tournaments. The U.S. Women’s Open, to be held next week, marks the halfway point of the season. Park could break the record for single-season victories by an Asian, set by former World number one, Yani Tseng of Taiwan, who won seven times in 2011. Having kept the top position for 10 straight weeks, Park is also leading the race for the LPGA Player of the Year award, which no Koreans have won.

Park has earned 191 points, more than double that of the runner-up, Suzann Pettersen of Norway, who has 87 points. Stacy Lewis of the U.S., who won the award last year with four victories, is trailing with 85 points. Park’s compatriot Shin Ji-yai, the 2009 Rookie of the Year, is in fourth place with 57 points.

Two other 24-year-olds, Shin and Lee Il-hee, will be seeking their second victory of the season at Arkansas.