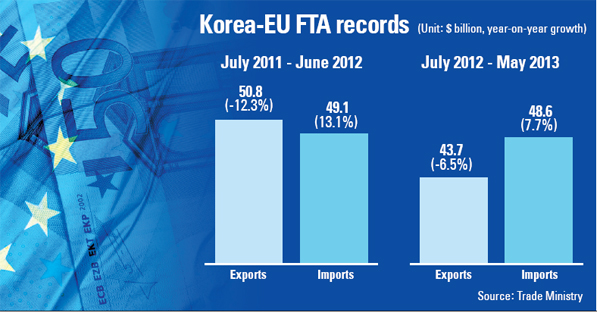 It has been two years since implementation of the free trade agreement between Korea and the European Union, but exports to the economic bloc have dropped, raising questions about the effectiveness of the trade pact.

The Ministry of Trade, Industry and Energy yesterday said the country’s exports to EU countries decreased 6.5 percent to $43.7 billion during the period from last July through May.

The fall in exports largely stemmed from the stagnant shipbuilding industry, the ministry said. Exports of ships accounted for 9.75 percent of Korea’s total exports to the EU in 2011. That share slipped to 6.91 percent last year.

However, significant cuts in ship prices and lower demand in the wake of the European debt crisis caused total exports to the EU to decline.

About 80 percent of Korean shipbuilders’ customers are European, according to an industry source.

“The continued economic downturn on the European continent from 2009 through 2012 resulted in the contraction of our exports to the European market and overall investment,” said Kwon Pyung-oh, deputy minister for international trade and investment. “But the Korea-EU FTA has helped small businesses pioneer the market with products that benefit from the EU FTA.”

Since European countries have been dealing with the EU debt crisis, they have imported less worldwide. Imports from China and Japan, major competitors of Korea, fell 2.4 percent and 12.4 percent. Those from Taiwan dropped 7.7 percent.

From the first year after FTA implementation to the second, EU countries’ imports from Korea dropped 2 percent. Those from the United States expanded 3.6 percent, without an FTA. The United States and EU are currently in the early stages of talks on a free trade agreement.

Despite the government’s advocacy for the Korea-EU FTA, the effectiveness of the deal has come under scrutiny.

“Since Europe is expected to continue posting negative growth at least until the end of the year, we can’t expect remarkable improvements from the Korea-EU FTA,” said Kang Yoo-duk, a research fellow at the Korea Institute for International Economic Policy. “It is a precondition that an FTA partner’s economy should be in a good condition to boost effectiveness of the deal.”

Because the crisis in the European economy is the first since World War II, policy makers couldn’t predict the near-term outcome of signing the FTA deal. Leading up to the FTA, Korea enjoyed a $19 billion annual trade surplus with the region, but over the past five years trade deficits have totaled nearly $20 billion, according to Kang.

“In order to secure a stable position in overseas markets, there is a growing need to accelerate efforts to complete bigger trade pacts like the Regional Comprehensive Economic Partnership and Trans-Pacific Partnership,” he said.